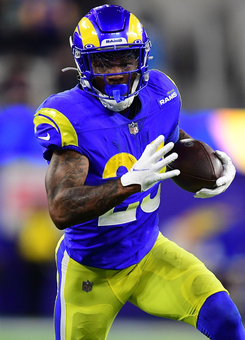 What do you make of Cam Akers prospects for 2022? You had him ranked pretty high going into 2021 before his injury. Watching the Rams feed him the ball early in this playoff game makes me think he should be in line for a strong 2022 season.

Agreed. He ran hard on Monday night. Damn hard. Sony Michel started that game, but Akers finished with more playing time and more touches. I thought Akers looked better than Michel. I expect Akers will be their most productive running back on Sunday in Tampa. All of which is pretty remarkable, with Akers being a half year removed from a torn Achilles.

A week ago, I was thinking Akers would be showing up at camp in 2022 looking to land a role – to be a contributor. Achilles injuries can torpedo careers. I was thinking they’d be looking to add another significant running back in the offseason. But after that game Monday night, I would think the Rams are expecting Akers will be their starting running back next season. They still have Darrell Henderson; he’ll probably get some touches. Maybe they re-sign Michel or add somebody else. Perhaps they think Jake Funk is ready to be their third back. But Akers looks like their top guy. Off the top of my head, when we’re sitting down and drafting next August, I would think Akers will go somewhere between 8th and 12th among running backs.

I'm in a season-long league that goes all the way through the playoffs. There are 8 teams left that draft out of the remaining NFL teams, standard, non-PPR. We're the #1 seed and pick first every round. Each team can freeze players from their regular-season roster and I expect the following to be froze: Allen, Stafford, Burrow, Henry, Akers, A. Jones, Kupp, Chase and Hill. We have Brady, Gronk and Evans we could freeze, but I'm concerned with the game flow this week for TB against LA and having that many players from one team. Do we freeze any of them or look elsewhere this week? FYI, QBs in this league get 6 pts per touchdown. They tend to go quicker and not sure I wanna end up with Garoppolo.

You definitely don’t want to end up with Garoppolo. We’re in agreement there. I posted an overall playoff board earlier in the week. But we can re-visit that now, since we’ve had a chance to look in more detail at the four upcoming games (for the Wednesday Weekly preview).

There have also been some injury updates. Most notably, Derrick Henry, Leonard Fournette and Clyde Edwards-Helaire are looking likely to be available. CEH was a full participant at practice on Wednesday, while Darrel Williams (toe) didn’t practice at all. So as it stands now, you would think KC will be going with some combination of Jerick McKinnon and Edwards-Helaire at tailback.

Updated projections appear below. For each guy, you’re looking at his expected per-game numbers. The final column shows total expected fantasy points, using the format you outlined (with touchdown passes worth not 4 but 6 points). Rodgers appears as both the first and last player on the list of my top 100 (with Aaron first and Amari 100th).