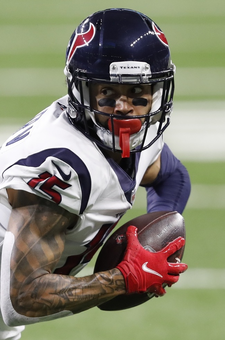 Been using FFI for 26 years and this has been one of my best seasons ever. Final tally: 7 leagues, 6 playoffs, 5 Super Bowls, 3 titles. So THANK YOU! My question is, do any of your leagues have a creative punishment for worst team? For example, one of our leagues is notoriously difficult for the commish (3-year contracts, salary cap/auction format, rookie draft, etc.) so instead of a Toilet Bowl bracket for the eight non-playoff teams, we have a Next Season Commissioner bracket – where the team that can't win out of the bracket is the commish for next season! Every team tries like hell those last 3 weeks! Thanks again for an awesome season.

That’s a fun idea, but you’ve got to have 12 guys who are capable of being the commissioner – guys who have their shit together. That’s an important job, and it’s not for everyone. We want to make sure the league continues to run smoothly. I know of some leagues – the BAFL, for example – where the loser is required to bring drinks and snacks to next year’s draft.

I recall a preseason podcast where Justin and Ian debated the prospects of Will Fuller. Ian was completely dismissive of Fuller and it was apparent in the rankings with Fuller down around #200 while other sites generally had him in the 60-80 overall range. Perhaps the most prescient call of the season. The only blessing was that Fuller never was a "questionable" threat to play. If there is a question here, what was the source of that uncanny certainty that Fuller would be useless? Thanks for the great stuff all year long.

With how I’m grading players, players who aren’t likely to play a full season are devalued. Fuller definitely fits into that group; he’s missed at least 5 games in each of the last 5 years. And in this case, there were additional issues. Fuller is at his best as a vertical threat, but the Dolphins don’t have a quarterback who really makes those throws. They also drafted another high-profile receiver (Jaylen Waddle) after signing Fuller. So he was never a guy who was going to be drafted onto one of my teams.

At the same time, I will be interested to see where Fuller lands. He’s a free agent. He’s 27, and he’s really fast. Get him in the right offense with the right quarterback, and there will be some good games. In the last four years, only 13 receivers have caught over 30 passes while averaging over 11 yards per pass play (that is, not only yards per catch, but also factoring in incompletions). Fuller is the only guy who’s done it twice. The Dolphins gave him a one-year deal worth $10 million. After a disaster season, the price will be going down, potentially making Fuller a very nice value in 2022.

Not really a question but I just have to say kudos, Ian, on your Braxton Barrios call for Week 17. That kind of call is what sets your product apart in my opinion. You are not afraid to go out on a limb when the stats back it up. I just wish I would’ve listened to you.

Thanks. Unfortunately, I also didn’t follow my own advice. I had him in the starting lineup in one PPR championship game, but when Antonio Brown was deemed good to go, I pulled Berrios out on Sunday morning. The other league uses TD-only scoring, and I went instead with Byron Pringle. Annoying (though the lineup decisions didn’t affect the results of either game.)

DO YOU PUT OUT A REDRAFT FOR PLAYOFFS?

I’m working on that as we speak. We’ll have a list going out on Monday. In that one, players will be listed by expected overall CUMULATIVE production. That is, if you have a player on a team that’s playing three games and averaging 50 yards, he would come in ahead of a one-and-done player who ran for 100 yards (3 x 50 = 150, and 150 is 50 yards more bigger than 100). The forecasting, of course, is more nuanced. There are no teams that are 100 percent certain to lose in the first round, so rather than one game, the expected loser might instead by projected at 1.1 games. And certainly, we can’t guarantee anybody will play three games; those kind of players more likely will be projected at something like 2.2 or 2.4 games. But the idea is the same. For those interested in more straight-forward Week 19 projections, those will go out on Wednesday morning.

Our playoffs continue into Week 18, and I’m going back and forth about Dak Prescott. You’ve got him ranked very low — 26th — in customized rankings, largely because of concerns he might be pulled early. I also have Tannehill (13th), and Taysom Hill (8th) is available. The Cowboys say they will play their starters, but I know better than to take that at face value. On the other hand, if Dak only plays a half, he may produce more in 30 minutes against Philadelphia’s second-stringers than Tannehill or Hill produce in 60 minutes Look at what Dak did in the first half against the WFT two weeks ago. Do I swing for the fences (I’m vying for the championship, and trail narrowly after the first week of our two-week matchup), or play it safe?

By the time Saturday rolls around, you may have a better feel for how much the Cowboys are playing their starters. They just put their franchise left tackle, Tyron Smith, on the COVID list, so he won’t be playing. That might affect their decision making. When Mike McCarthy was the coach at Green Bay, I remember him holding Aaron Rodgers out of a Week 17 game 10 years ago (with Matt Flynn filling in and throwing 6 TDs in a shootout win over Detroit). As it stands today, I would be starting Taysom Hill. Hill isn’t a good quarterback, of course, but he has a fantasy-friendly playing style, with the likelihood of him running for 50-plus yards and scoring half of their rushing touchdowns. They’re playing against a lesser Atlanta defense.