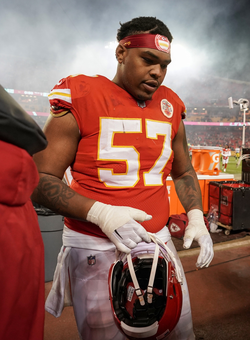 KC tackle Brown one of few sure things

The deadline for applying the franchise tag is Tuesday afternoon, and it's looking like a fairly quiet year for teams securing those top-level free agents. Some of them will certainly stick with their teams on long-term deals, but at this point Kansas City's Orlando Brown is one of relatively few certain franchisees.

Another possibility is Green Bay wideout Davante Adams. According to a report yesterday, Aaron Rodgers will let the Packers know if he's staying put before the deadline for applying the tag. If he's staying, the story goes, the Packers will use the tag on Adams to retain him. If he's gone, Green Bay will find itself in rebuild mode, and will let Adams walk. I spent way too much time arguing with someone yesterday that the Packers should franchise Adams regardless, trading him if Rodgers leaves, but I think it's a moot point -- most likely (my opinion), Rodgers stays put, and so does Adams.

The Bengals want to work out a long-term deal with safety Jessie Bates, so using the tag will buy them time. The Chargers apparently want to keep Mike Williams; he's another strong candidate. The Cowboys and Dalton Schultz are a possibility, and so are the Bucs and Chris Godwin (which seems odd to me, with Godwin coming off a torn ACL). Other candidates mentioned frequently look like they'll instead be free. The Patriots aren't going to franchise corner J.C. Jackson, and the Cardinals (as mentioned yesterday) won't franchise Chandler Jones. Nobody else stands out; the Dolphins and Mike Gesicki have been mentioned, but it seems unlikely.

Kansas City using the tag on Brown makes sense. They gave up their first-round pick a year ago (and more) to acquire him, so they don't want to let him walk away after a year. That was part of an offensive line makeover which paid off, even though the team fell just short of a Super Bowl return. Kansas City last year surrendered just 28 sacks on 731 pass attempts. Credit for that doesn't go solely to the offensive line; the quarterback's mobility and release are also factors. But regardless, it was the 2nd-best sack rate in the NFL, trailing only Tampa Bay.

Performance in this area isn't everything, as shown by the fact that one of the worst teams in the league in this regard was the AFC's actual Super Bowl representative, Cincinnati. But it highlights why that's the key area the Bengals should be looking to improve in during free agency and/or the NFL Draft. Six of the best eight teams in this regard last year, and eight of 11, were playoff teams.

We'll know for sure tomorrow afternoon, but seems like a pretty low drama offseason in this area.