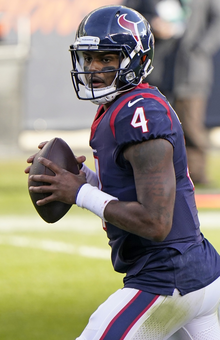 Quarterback is the key position in the NFL, and in that area, things have skewed towards the AFC side in recent weeks, with Russell Wilson traded out of Seattle and Deshaun Watson staying in conference in his trade. There are fewer quality quarterbacks in the NFC.

But there’s way more depth in the AFC. Set aside the debate at the top and look at the bottom half of the top 10 for each conference, and the AFC guys look a lot better.

They also, without argument, are a lot younger. Setting aside Wilson, the top six other AFC quarterbacks are Patrick Mahomes, Josh Allen, Joe Burrow, Deshaun Watson, Lamar Jackson and Justin Herbert. All of those guys are 24-26 years old. The NFC, meanwhile, has five of the six oldest notable quarterbacks, headlined by Brady (44 years old) and Rodgers (38).

Below see the top 11 quarterbacks in each conference, ordered by age. The AFC guys, on average, are 4 years younger than those from the NFC (at least for these top guys in each conference). In the chart, I’ve got the AFC players tagged with black dots.

Eleven quarterbacks for each conference, I will admit, is an arbitrary number. But I didn’t want to get into speculating who would start for teams like the Seahawks, Colts, Steelers and Saints. And it was difficult deciding on the 10th quarterback in each conference. In the AFC, I think, that would involve weighing the accomplishments of 33-year-old Ryan Tannehill against the future potential of Trevor Lawrence. And on the NFC side, I would be debating whether to include Justin Fields or Trey Lance, who are both more potential than results guys at this point in their careers. By expanding the list to 11 per conference, I get to include all four of those players.

The most notable quarterbacks not listed below, I think, would be Baker Mayfield, Jameis Winston and Jimmy Garoppolo (who are all up in the air right now), along with Jared Goff, Tua Tagovailoa, Daniel Jones, Davis Mills, Zach Wilson, Sam Darnold and Drew Lock.

Lots of good young quarterbacks in the AFC right now. For fantasy purposes, I might be looking to select a defense from the NFC side, just to avoid having too many weeks matched up against these quarterbacks.