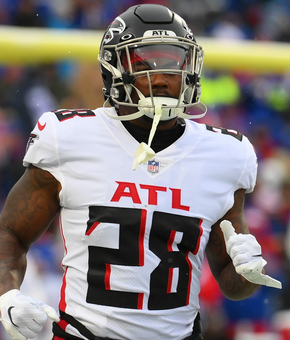 The Ravens had Latavius Murray, Devonta Freeman and LeVeon Bell cycle through their backfield last year. They’ve agreed on a contract with a similar kind of back: Mike Davis.

I haven’t seen the dollar figures, but I’m sure it’s for close to the league minimum.

Davis comes off a pretty lousy season with the Falcons. He ended up playing second fiddle behind Cordarrelle Patterson. Davis ended up averaging 30 rushing and 15 receiving yards in 17 games, with 4 TDs.

That’s not all on Davis, of course. The Falcons were pretty terrible last year. Not a lot of backs would have had much success in that offense. But he’s a modest talent, as evidenced by a bunch of other teams having Davis and either releasing him or not making much of an effort to keep him around. The 29-year-old has played for the 49ers, Seahawks, Bears and Panthers.

Davis was pretty good in Carolina. With Christian McCaffrey missing most of the 2020 season, Davis in his 12 starts averaged 53 rushing and 22 receiving yards, with 8 TDs – he averaged almost 4 catches per game that year.

But he’s a pretty ordinary runner. He’ll run hard, but there’s just not a lot of speed or talent. He was the only back last year who finished in the bottom 5 at his position in both yards per carry (3.6) and yards per catch (5.9). That’s among the 48 who caught at least 25 passes. If you prefer to instead look at yards per pass play (including incompletions) he’s in the bottom 5 there two.

He was one of two backs last year who ran the ball at least 100 times and didn’t have a 20-yard run.

With Baltimore, I would see him as a possible backup behind Gus Edwards. The Ravens have J.K. Dobbins, and I don’t think they would have any interest in subbing in Davis there. He’s not fast enough. But as a 5-foot-9, 220-pound bowling ball, I would think he might be able to adequately fill in for Edwards, with some change-up carries between the tackles.

Edwards is coming back from a torn ACL. If he has some kind of setback, Davis could be a contender for some playing time there.

But there’s no potential of Davis being some kind of surprise player. Over the last four years, 40 running backs have run the ball at least 400 times. Only five of those backs have averaged fewer yards per carry than Davis, and three of them aren’t currently on NFL rosters.

In the chart below, the final column shows not rushing touchdowns but all touchdowns. The players not currently on teams are tagged with black dots.