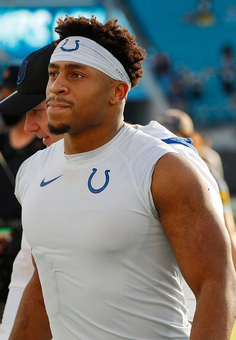 Tidbits from the NFL Schedule

The NFL schedule was finally released yesterday, you may have heard about it thanks to the endless promotion, announcement of one random exciting game per day, and high drama fanfare as though Geraldo Rivera was opening vault on live TV. With all of it before us (sort of; good luck finding a simple version that can be seen all at once without suffering through a video), I have some thoughts.

A disclaimer, I do not typically adjust my draft board based on schedules, at least for positional players. Spending too much time saying This running back or wide receiver has a tough playoff schedule seems like a good way to beat yourself. We don't know for sure which defenses will be best or worst against the run or the pass. Just because somebody thinks that Joe Mixon will face a tough run defense in the fantasy playoffs, doesn't mean he won't be a PPR star that catches 6 passes for 70 yards that week.

If you move players around too much to help yourself based on perceived good or bad schedules, you are just as likely to hurt yourself, drafting a player you have ranked lower, or is more likely to get hurt or benched, etc. Do not dramatically alter your ordering of players based on preseason expectations as to which defenses will be good or bad, that's my advice. That said....

Bye Weeks. If you're in an FFPC or FootballGuys league, the individual league playoffs occur in Week 13 and Week 14. So it's fair to consider which teams are on bye that week. I watched a guy steamroll my league a couple years ago, then get bounced in the playoffs because his two top players, Patrick Mahomes and Dalvin Cook, were on byes. Of course, he wouldn't have steamrolled the league if he'd adjusted his rankings to not select those players. Tough decision.

Anyway, this year the NFL, in its infinite wisdom, has decided to schedule six teams on bye in Week 14. I have no idea who thought this was an intelligent thing to do. They're aware that some people play fantasy football, right? I mean, they don't have to cater to or even respect that massive segment of the fanbase if they don't want to. But to willfully annoy it by giving six teams the week off in what is a playoff week in a lot of leagues is pretty cold. (Aside: no teams are on bye in Week 12.) Falcons, Bears, Colts, Packers, Saints and Commanders are all off in Week 14. If you're in a league that has a playoff game that week, it's a bad idea to build a Jonathan Taylor, Terry McLaurin and Aaron Rodgers roster. If you land the top pick do you not draft Taylor? No, you still draft Taylor. But since you already know you definitely won't have him that week, best to make sure the rest of your key starters are from teams not on byes then.

Week 13 the Cardinals and Panthers are on bye. Only two teams. Again, in Week 12 and 13 combined a total of two teams are on byes. In Week 14, six are. Call it what it is: stupid.

There are also six teams on bye in Week 9. That's fine, because it's Week 9.

Some schedules that stand out to me, for good or ill:

Arizona Cardinals. We've talked a little about how Kyler Murray and Kliff Kingsbury have tended to fade down the stretch. Their 2022 schedule won't help them reverse that trend. Seven of Arizona's final eight games are against the Rams, Chargers, Bucs, Broncos, Patriots and 49ers twice.

Cincinnati Bengals. Teams that lose Super Bowls seldom get back the next year. Looking at the Bengals schedule, they might also have problems. It starts out OK (Pittsburgh, at Dallas, at Jets, Miami). But its final eight games include a stretch of four of six on the road against the Steelers, Titans, Kansas City, Browns, Buccaneers and Patriots, followed by the Bills and Ravens to close the year. No easy matchups in the second half of the season.

Dallas Cowboys. The NFC East is playing the AFC South, which looks pretty friendly for opponents this year. Dallas down the stretch plays (seemingly) three of the league's worst teams in a four-game stretch: Giants, Texans and Jaguars between Thanksgiving and Christmas, with a tough one against the Colts. But pretty friendly for three of those.

Denver Broncos. Russell Wilson opens on the road against the Seahawks in his old stadium, on Monday Night Football, which seems unnecessarily mean. But it will also be mean for either Drew Lock or Geno Smith, presuming the Seahawks haven't upgraded at quarterback by then; Seattle (I think) will be bad this season. And three of Denver's next four are also against what look like lousy defenses (Texans, Raiders, Panthers). Like I've said, we don't really know which defenses will be good or bad. But I'm willing to guess in the case of these teams.

Indianapolis Colts. Matt Ryan and the Colts open against the Texans and Jaguars, and finish against the Giants and Texans. You've got that pesky Week 14 bye to worry about if you draft Jonathan Taylor, but the schedule looks OK early and late in the weeks the guy is actually playing.

Kansas City. Second half of the season looks kind of rough. The final eight games include both Broncos games, the Rams, the Bengals, and the Chargers.

L.A. Rams. Super Bowl champs get the Thursday opener against the Bills, that should be a higher scoring affair. Next five include both 49ers games, which are tricky, but also the Falcons, Cardinals and Panthers, which might not be. Down the stretch they play three in a row against the Packers, Broncos and Chargers in Weeks 15-17, which are playoff weeks in most leagues, so not ideal (but those teams won't necessarily have shutdown defenses).

Miami Dolphins. Tua Tagovailoa is on the spot for Miami this year. So it's unfortunate that his first four games look kind of daunting. New England, at Baltimore, Buffalo and at Cincinnati. Not a terrific opening for him.

N.Y. Jets. The Jets kick off the season with four straight games against the AFC North. I don't have a comment on whether those will all be good or bad defenses; historically in recent years, they've been pretty good, so perhaps not a great opening stretch for Zach Wilson. And also, Why? I get that it's tough creating a schedule, it just seems odd that you'd play your first four against an entire other division.

Philadelphia Eagles. Jalen Hurts and company might get off to a good start. Their season opens as follows: Lions, Vikings, Commanders, Jaguars. It also closes pretty well: Giants, Bears, Cowboys, Saints, Giants. There are some tough games in the middle, but Eagles look pretty good in the NFC East.

Washington Commanders. Carson Wentz should get a confidence boost early against the Jaguars (although granted they beat him in Week 18 a year ago, keeping the Colts out of the playoffs) and Lions. But he then faces the Eagles in Week 3, and his last three are against the 49ers, Browns and Cowboys, priming him for a nice final-month faceplant.

If anything sticks out to you as good or bad about the schedule feel free to comment below.