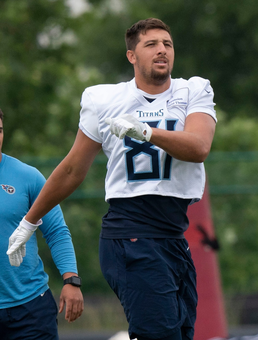 I'm not crazy about the costs on tight ends I'm seeing so far. I don't really want to use a first- or second-round pick on Travis Kelce or Mark Andrews, with one being old and one being tied to a passing game I'm concerned about. I like Kyle Pitts, but he's also going really early.

The next tier of players (Darren Waller, George Kittle, Dallas Goedert, T.J. Hockenson) also looks a little pricey. I imagine I'll wind up with one of those guys in a lot of leagues, but I can see myself passing on them for the wide receivers or quarterbacks who might be available where they'll go. So I'm looking for cheap, later-round tight ends who might catch a surprising number of passes.

I find myself looking at a couple of lightly regarded veterans with new teams, Austin Hooper (pictured) in Tennessee and (don't laugh) Hayden Hurst in Cincinnati.

Pulling out the team numbers from the last two years, it looks like I should be focusing on Hooper, and hoping he gets the majority of the team's receptions from the position.

Nobody is surprised to see Kansas City, Las Vegas and Baltimore all in the top 5. Kelce, Waller, Andrews. Miami also makes sense, with Gesicki and their foolish red-zone spraying of passes to blockers like Durham Smythe. And Philadelphia, San Francisco and Tampa Bay, with some top receiving tight ends.

A little more surprising, to me anyway, is Denver, but even more so the presence of the Browns and Titans in the top 10. Cleveland had Hooper as its main guy the last two years. Tennessee didn't have much at the position, but now it has Hooper.

Some of it depends what you're looking for. If we sort the above table by yards (rather than receptions), the Titans fall some. If we sort by touchdowns, the Packers and Bills move way up, while the Broncos and Dolphins fall. Something to do with quarterbacks good at throwing touchdowns versus ones that aren't.

Anyway, I'm thinking Hooper is on my list of late-round sleepers at the position. I still have some interest in Hurst, who probably won't even be drafted in most leagues, while keeping in mind that over the past two seasons, only five teams have completed fewer passes to their tight ends than the Bengals. Not ideal when looking for a sleeper.