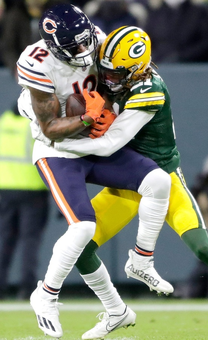 Can other Rams wideouts step up?

It's tough for Super Bowl champs to repeat, and I think it's going to be difficult for the Rams. They have Sean McVay and a lot of great offensive pieces, but they have a lot of questions, too.

I'm concerned about the backfield, definitely. Cam Akers came back in record time from a torn Achilles, but he didn't look good while doing so, so he's a question mark. He'll be a year removed from the injury, at least, but it will still be new ground for running backs if he's anything close to what he was pre-injury.

And at wide receiver, it will look a lot different. Last year they had the incredible Cooper Kupp season, and got just enough from Robert Woods the first half of the year and Odell Beckham the second half, right up until his Super Bowl injury. But things are different now.

Woods is gone, and Beckham is unsigned after tearing his ACL in February. The Rams will now be counting on Van Jefferson and former Bear Allen Robinson after Kupp, and it remains to be seen if they'll get the kind of performance they got from the Woods/Beckham combo.

Last year, those other guys were disappointments, in terms of actually coming down with passes thrown their way. Robinson was working with lesser Chicago quarterbacks and may not have been overly interested in the proceedings, but regardless. The projected No. 2 and 3 wideouts for the Rams weren't as effective as the departed players.

Some of that is based heavily on the routes those guys are running (Rondale Moore ran a lot of routes around the line of scrimmage while Robby Anderson ran a lot of fly patterns), and some is on the accuracy of the quarterback (also a negative for Anderson, as well as Kenny Golladay). But those catch rates are a whole lot better for not only Cooper Kupp but also Woods and Beckham (with the Rams) than for Jefferson and Robinson.

Table shows all wide receivers with at least 60 targets last year. Beckham's numbers are divided between his work with the Rams (middle of the pack) and Browns (awful).

Robinson is better than he showed in Chicago last season, while maybe Jefferson can step up. But I wonder if the Rams won't still decide to bring back Beckham, assuming he can get healthy. They might need him to make sure things are running smoothly with the offense.