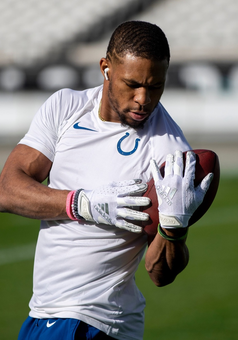 For PPR who are your favorite RBs to catch 50 passes who are not starters. Like James White for example.

I think there are four you can think about. Five if we call Chase Edmonds a backup, but most probably think of him as Miami’s starting tailback right now. Nyheim Hines leads the way, I think. James White could be right there with him if he’s healthy. White caught 6 passes in each of his two full games last year before the hip injury. I worry that J.D. McKissic will fall off with Carson Wentz at quarterback, but he should still be one of the most productive pass-catching third-down backs. And Tony Pollard. He was saying last week that he’d like to get on the field more as a slot receiver. The Bills selected James Cook with an eye on using him as a pass catcher, but I don’t think he’ll be up those guys.

In a TD-dependent dynasty league. My backs are Barkley and Ronald Jones. Does Jones get the goal-line carries? Is there a better TD option with these available backs that include: Penny, Edmonds, Singletary or any rookie?

I like Devin Singletary. He looks pretty entrenched as Buffalo’s main running back, and that might be the best team in the league. He was very good in the second half of last year, with 9 TDs in his final nine games. Josh Allen seems to be moving away from running it so much himself around the goal line. He’d be the guy I’d be hoping for. Rashaad Penny was awesome at the end of last year, but he’s had a lot of injuries and is playing on a lesser team. I’m not a big Chase Edmonds fan, but with what Miami is paying him, I suppose he’ll be their Week 1 starter.

But you asked about Jones. He’s in a decent situation, in that Clyde Edwards-Helaire looks like a lesser starter – perhaps a vulnerable starter. Kansas City also re-signed Jerick McKinnon, and he played well in the playoffs last year. And as a smaller back, CEH could be lifted in some goal-line situations. They pulled him some last year, when KC was looking to pick up a key yard (either at the goal-line or on third-and-one or fourth-and-one), he carried the ball only 3 times. He converted all 3 of those carries, but they had two other backs (Darrel Williams and fullback Michael Burton who combined to convert 20 of 26 of those plays). Edwards-Helaire went only 2 of 9 in those situations in 2020, contributing to Williams replacing him a bunch last year. Jones at Tampa Bay was an above-average short-yardage runner (21 of 28 over the last three years). But he’s also not a big back, so I don’t think it’s a given he’ll regularly be their short-yardage guy. In your league, you would never select him before Penny, Edmonds or Singletary.

If you draft Jones, I think, it would be more with the hope he starts some games, rather than that he’ll punch in 8-9 TDs as a goal-line guy. Andy Reid has coached KC for the last nine seasons. In that time, I see four years where a back ran for at least 7 TDs, and all of those seasons were authored by starting, high-level backs (Kareem Hunt, Jamaal Charles) rather than short-yardage specialists.

In my league we start 3 WRs, 2 RBs and a flex, so there is a little more emphasis on WRs. How soon do I draft: Jefferson, Kupp and Chase, and who would you draft before them?

You can start twice as many wide receivers as running backs. So when looking at those initial picks, I would select a running back only if I felt he was going to finish with more overall production. I think that puts Kupp, Jefferson and Chase in the top 5 overall (along with Taylor and Ekeler).

Do you think Javonte Williams makes the jump to a top 10 RB, or will we need to wait another year? I know the Broncos brought Melvin Gordon back, but what if that was to just back up Williams since he’s already familiar with the team? I feel like if they were actually that interested in Gordon, they wouldn’t have let him test the free agent market. Gordon was productive last year, but Javonte is clearly the better player at this point in his career. Personally, I think Javonte is going to be a 1st round pick in years to come, but is the breakout actually realistic for this season?

The way I’ve got my board stacked, I don’t think I’ll be selecting Williams. Great player, and I would guess there will be some games this year where he’ll get to play in more of a full-time role (perhaps Gordon is out with an injury or Williams simply gets the hot hand). More commonly, though, I think it will be a one-two punch backfield. That’s how the coach is talking, and that seems to be Williams’ preference as well.

Looking forward to the magazine again this year. With so many QBs on the move and also new coaches, it's hard to take overall team stats as predictive going forward for the skill positions like RB, TE, WR when trying to predict target shares. We have seen in the past certain QBs target the RB position more than others, lean on TEs, or funnel to WRs. When looking at RB, targets are more valuable than carries and RBs who see 4-5 catches a game have a lot of value. Guys like Tom Brady, Matt Ryan tend to target RBs more (James White in NE, Fournette last year in TB) and it boosts the value of those RBs. Could we see an uptick in targets for guys like Jonathan Taylor and Nyheim Hines with Ryan in Indy? Carson Wentz is notoriously bad at targeting RBs (he goes to WAS now, hurting those RBs instead). Also, who are the QBs that target RBs the most and who target them the least? I know running QBs like Lamar Jackson have some of the lowest RB target shares but, Justin Herbert is mobile and he has one of the highest. Curious what you think.

Seems like you’ve got a strong command on the various quarterbacks. There are seven teams that completed at least 100 passes to running backs. In the chart below, you see the totals for each team, along with their team totals (which include not only running backs but wide receivers and tight ends). For three teams, at least a quarter of the passing production went to running backs: Carolina, Atlanta and Washington. (With both Atlanta and Washington, however, they’ve got new quarterbacks who will throw less to running backs). There are five teams where backs have accounted for less than 15 percent of the receiving production. For the percentage numbers, I’m using PPR scoring. (That is, the percentage number shows the combined production of the running backs divided by the overall team production.)