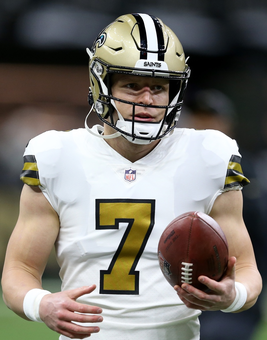 What are your thoughts on Taysom Hill as a TE this season? Although he's been re-designated as a TE it sounds like they still plan to use him similarly - as a wildcat QB, a RB and a receiver in equal measure. Now moved to the ever-thin TE position, I wonder if he's a sneaky fantasy play there. What do you think?

Dennis Allen back in March said Hill would focus on playing just tight end. Now he’s saying Hill will be a utility player, like he’s been in the past. The Saints have a lesser quarterback (at least in my opinion) perhaps increasing their willingness to plug in Hill for a few plays – perhaps in goal-line and short-yardage situations. But as I look at my board, I see some decent tight end prospects outside the top 20 – Robert Tonyan, Hayden Hurst, David Njoku. So I’m thinking that for me, Taysom Hill in a 12-team league looks more like a third tight end rather than a starter or primary backup. I’m a lot more interested in Cole Kmet, Irv Smith, Hunter Henry or Evan Engram as my second tight end rather than a wild flyer on Hill. And in typical formats, I’m not looking to carry three tight ends.

I am in a 10-team keeper league where we have 18 roster spots and keep 12 players. I am wondering whether to keep Deshaun Watson or not. I kept him last season knowing he was not going to play, with the hope that he would be playing this season. It is looking more and more like he will not be playing this season either. Is his long-term value high enough to warrant a roster spot sitting on the bench for two years? I also have Kyler Murray and Derek Carr on my roster as keeper options.

It will be a surprise, essentially all observers agree, if Watson plays more than about half of this season. He’s apparently agreed to settle 20 of the cases against him, but I’m not sure he’s playing at all. (Is the league going to be comfortable putting him on the field?) With Murray and Carr both being top-10 type quarterbacks, I would be leaning towards rolling with those guys. Whether Watson is worth keeping around for another year for what he might do next year (and maybe for part of this year) comes down to weighing him against the guys on the bottom third of your roster. Watson should be a top-10 quarterback in future seasons – maybe top 5. That would be the payoff. I don’t know the exact specs in your league, but I’m guessing it would be a considerable hardship to be locked into using three roster spots on quarterbacks – it would limit your flexibility on the waiver wire all year. (You should have a better feel for how that will play out, having gone that route last year.)

Hey Ian, bummed that my league of record voted to go to PPR scoring after 25 years of standard (hate PPR, but you gotta roll with the majority.) Lineups are RB-RB-WR-WR-TE-Flex-Flex. Given the 2 flex spots, in my mocks I seem to like my teams much better when I go 4 WRs (or 3 WR & TE) with my first 4 picks. I'll be picking in the back half of the draft - spots 7-12. I was wondering how you would approach such a format in my shoes?

When there are double flex spots, I start looking more at players and less at positions. You need to draft seven field players, and only two of them need to be running backs. Those running back spots aren’t any more important than the flex spots. So if you’ve got an opportunity to select a 90-catch receiver for a flex spot, I would be willing to select that player, even if it meant having to settle for a seemingly modest starting running back – maybe somebody like Nyheim Hines. I am willing to thinking of my second running back as my seventh overall starter. I’ve drafted teams before with four high-volume wide receivers, and it’s tended to work well – especially in a PPR format. They tend to be every-week starters, and receivers don’t have as many injury issues as running backs. You get a bunch of those wide receivers, and it should free you up to carry an extra backup running back or two, improving your chances of landing one of the key backup-turn-starter running backs that emerge most years. Using my projections and merging RB-WR-TE into one position, my top 70 players include 40 wide receivers, 22 running backs and 8 tight ends – numbers that suggest that virtually all teams in your league should be starting 4 wide receivers and 2 running backs.

We have in the NFL QB-WR college combos like Tua and Waddle and Adams and Carr. Would like to see complete list for QB-WR for 2022 season. And how about QB-RB and QB-TE combos from college.

You hit on a couple of the big ones. Off the top of my head, I can think of a few others: Joe Burrow and JaMarr Chase, Jalen Hurts and DeVonta Smith, Russell Wilson and Melvin Gordon (they played one year together at Wisconsin), Mac Jones and Damien Harris, Trevor Lawrence and Travis Etienne, Drew Lock and Albert Okwuegbunam.