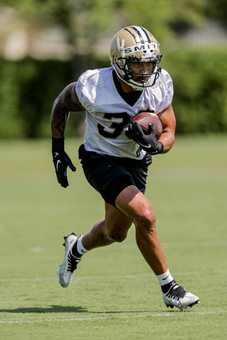 Early buzz for some of these players

I'm in a dynasty league with an open waiver wire and 26-man rosters. We have our rookie draft, and then the wire opens and a bunch of other youngsters are added. Usually the month of June includes regular additions, but it's been quiet so far this year.

If I did a column of the top 10 available players, there'd be a lot of head scratching and "who?" So instead I'm going to write about the last 10 interesting players who HAVE been added, followed by the top 5 (I think) who are available. Hopefully you'll find some players available, or that you've recently added, in your own league.

Here are the last 10 interesting position players added in this league.

1. Austin Allen, Giants. The Giants said goodbye to both Evan Engram and Kyle Rudolph in the offseason; they're remaking the tight end depth chart. Fourth-rounder Daniel Bellinger has the draft capital argument, but it's Allen who's been making waves at OTAs. Allen's a 6-foot-8, 253-pound behemoth, and he averaged nearly 4 catches per game and 16 yards per catch at Nebraska last year. Positive camp reports for a pass catcher at a position of need in a new offense have to be respected.

2. Abram Smith, Saints. We've talked a little about the undrafted Smith (pictured), who's joined a Saints team with nothing much at running back behind Alvin Kamara (who's likely to be suspended). This is not to knock Mark Ingram, who's had a respectable career, but Ingram is 32 years old. Smith is an excellent athlete who played both linebacker and then running back in college, and as noted by a reader got a sizable signing bonus to join the roster. Exactly the kind of player who should be added in dynasty, just in case.

3. Tyler Badie, Ravens. Badie was a sixth-round pick, so he has a leg up on a roster spot over Smith. Balitmore's two top backs, J.K. Dobbins and Gus Edwards, are both coming off torn ACLs. At best, those guys are going to miss some of training camp, giving Badie an opening to earn himself a role. Not a big guy (5-8, 197), but he held up fine with a huge workload at Missouri last year: 1,934 total yards and 18 touchdowns, averaging 6.0 yards per carry.

4. Chigoziem Okonkwo, Titans. Okonkwo has received multiple positive reports from beat writers; I'm regretting he was grabbed before I could pick him up. The fourth-rounder out of Maryland was one of the two shortest tight ends drafted (6-3, 238), but former Titan Delanie Walker was even shorter, and he had a pretty nice career. Okonkwo caught 52 passes and 5 TDs last season, and has the potential to make Austin Hooper obsolete fairly quickly.

5. and 6. Keaontay Ingram and Darrel Williams, Cardinals. Sixth-rounder Ingram is the better dynasty prospect, but Williams (who just turned 27, so neither young nor ancient) might be the best 2022 option. James Conner comes off a great year, but Arizona will want to mix in a second back, and that's if Conner stays healthy. That's not a given: Conner missed 3, 6 and 3 games the previous three seasons in Pittsburgh, which is why Arizona was able to sign him cheaply a year ago. Ingram, who was a solid performer at Southern Cal last year, with good size (6-0, 221) and some stylistic similarities to Conner.

7. Marlon Mack, Texans. Not a big fan of betting on running backs with torn Achilles in their pasts, and I realize Dameon Pierce is the preferred target on this depth chart. But Mack can make a case for that job, and this is just his age-26 season. I don't take the other backs on Houston's roster seriously.

8. Kylen Granson, Colts. Ironically, I dropped Granson to add Ingram (above), and he was quickly snapped up. Maybe I'll regret it, but roster size isn't limitless and sometimes hard decisions must be made. The Colts will likely use multiple tight ends, with Mo Alie-Cox and rookie Jelanie Woods also involved, limiting Granson's upside. But, I wouldn't mind getting him back.

9. Kennedy Brooks, Eagles. Philadelphia backfield, amiright? Miles Sanders, Boston Scott, Kenneth Gainwell. Difficult to be sure how much Philadelphia likes or dislikes any of these players. Somebody's gonna mention Jordan Howard too. I think it's a lot more likely they find a way to give undrafted Brooks that inside running role, with him having decent size (5-11, 213) and rushing for 1,253 yards and 13 TDs (and 6.3 yards per attempt) at Oklahoma last year. If he shows anything in July and August, the team won't go back to Howard.

10. Ty Chandler, Vikings. Minnesota has a seemingly deep depth chart at running back, with Dalvin Cook and Alexander Mattison, but Cook misses multiple games every year and Mattison (3.7 yards per attempt last year) might not actually be very good. Chandler (5-11, 204) was a 5th-round pick and maybe he'll get a chance to catch on as the No. 3, just an injury away from more. Mattison's in a contract year.

11. Jerick McKinnon, Kansas City. We've written about him some here. He played well for Kansas City in the playoffs, and recently rejoined the roster; he's probably the best pass catcher at the position, which will give him some PPR value if he earns that role. On the other hand, he's 30 years old and (I believe) less likely to be the lead runner than either Clyde Edwards-Helaire or Ronald Jones; I'm not even sure he's going to make the team. Difficult to commit a roster spot to him in dynasty.

12/13. Isaiah Likely and Charlie Kolar, Ravens. Had Baltimore drafted one tight end in the fourth-fifth round, that player would look very interesting as the potential No. 2 receiving option at the position (No. 3 technically, behind Mark Andrews and blocker Nick Boyle). But Baltimore selected two within a dozen picks of each other, so it's difficult to champion either too greatly. Likely went for 912 yards and 12 TDs at Coastal Carolina last year, but Kolar went for 756 and 6 at Iowa State; debatable which is more impressive. Thus far it's Likely who's seen the most hype, making him the -- er -- likely favorite, but it's early.

14. Kyle Phillips, Titans. The UCLA wideout caught 59 passes and 10 TDs in 11 games last year, and Tennessee drafted him in the fifth round. I've seen some positive reports out of camp (whereas with first-rounder Treylon Burks, coverage has focused on the fact that he has asthma). In any case, Tennessee is basically starting from scratch at wide receiver and Phillips can make a case for a top-3 spot with a strong preseason.

15. Matt Breida, Giants. Breida is currently the No. 2 on the Giants behind Saquon Barkley. Feels like he should be on a roster, with Barkley having a recent injury history. I saw something this week where someone was contending that rookie wide receiver WanDale Robinson will be New York's 2nd-best running back option; "their version of Deebo Samuel." (Perhaps the preseason's most overused phrase.) All I'm going to say about that is that the team websites list Samuel at 6-0 and 215 pounds and Robinson at 5-8 and 185, and even that might be generous. I'll take Breida as New York's No. 2.