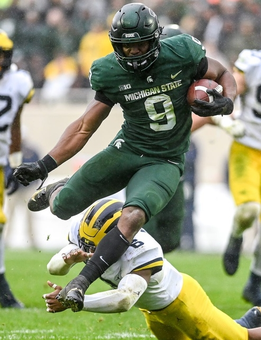 Wide receivers up, other positions down

It was a wide-receiver heavy first three rounds in the actual NFL Draft, and that carried over into the rookie draft in my dynasty league. It's a good year to be looking for wide receivers.

Since this is a 15-year-old dynasty league, picks are influenced by existing rosters. If you're loaded at wide receiver, as a for instance, maybe you'll be more likely to pick a running back. But I do think the way this three-round affair went will be fairly typical of most rookie-only dynasty drafts -- 1 QB, PPR scoring. I mocked this draft a week ago, and came pretty close with my predictions. Thirty of the 36 players drafted were ones I expected to be drafted, most fairly close to where I had them. Take that Mel Kiper! This doesn't automatically make them good picks (groupthink isn't always a plus), but this should be a good go-by if you have drafts of your own coming up.

Grouping these guys because they'll be the next six picks, in some order, in most drafts. I'm regularly re-ordering them in my rankings, but I think for me it would probably go London-Williams-Olave-Wilson-Burks for the wide receivers, with Walker sliding in somewhere; maybe 3 or 4. Burks went lowest of these receivers in the actual draft, but his size and landing spot are pretty compelling. Had I been sitting at 1.02 I'd probably have tried to trade down a few spots for an extra pick, and I believe the guy in my league did. It's a close group of wide receivers, and Walker isn't quite as much of a slam-dunk running back as Hall.

Watson-Moore-Pickens-Dotson is the second tier of wide receivers. Mistakes have been made (Mecole Hardman?) getting too infatuated with receivers landing with elite quarterbacks, which worries me a little about Watson especially and Moore slightly. If Watson takes a year to get up to speed, do we really think he'll have a lot of big seasons with 38-year-old Aaron Rodgers? Moore might be Patrick Mahomes' top wideout eventually, but Smith-Schuster can play and Kansas City might spread it around. I took Pickens and wrote about him here over the weekend. I considered Dotson, who went in the first round in the actual draft, but he's a smaller guy and I've got Terry McLaurin on my roster already. Would also rather be investing in a Steelers wideout choice than Carson Wentz's No. 2.

Pierce could be an immediate No. 2 for the Colts; tall and with good speed, at worst he'll open as a deep threat, working with one of the more accomplished quarterbacks the rookie wideouts get (at least this season; we'll see how long Matt Ryan lasts). Kind of a straight-line guy, I think. Tight ends get 1.5 points per reception in this league so the top rookies at the position get bumped up a little. Zach Ertz is old and Arizona might need to involve 2 tight ends more than you'd think given the DeAndre Hopkins suspension.

It's a run on running backs. A friend had picks 2.06 and 2.07 and I discussed trading for one of them, with Zamir my preferred target and Rachaad (who he took) the next choice. Oh well. Pierce gets most of his appeal from landing spot (gimpy Marlon Mack and elderly Rex Burkhead), Spiller fell further than most pre-draft talk anticipated, and he's stuck behind Austin Ekeler for the near future. Rachaad, hey, he could play fairly quickly as the No. 2 and be starting in Tampa Bay a year from now.

Pickett went a little earlier than I expected in this one-quarterback league, but my friend had lots of picks and the top quarterback wouldn't have lasted until his next one. Metchie has the Alabama wideout pedigree, albeit overshadowed there. Bell was a heavily targeted receiver at Purdue who might step into a slot role in place of Jarvis Landry right away. Ian wrote about Woods on the weekend; athletic tight end on a team that likes to throw to them. (I'm still holding out hope for Kylen Granson, personally.)

Robinson was my pick; he put up huge numbers at Alabama last year, buried for most of his tenure there by Damien Harris, Josh Jacobs and Najee Harris. No shame there, those guys are all pretty good. He'll start out behind Antonio Gibson but Ron Rivera's already talking about a 1-2 punch backfield, and Gibson has had some injuries. Worth the pick at this point, he was the last running back I was really interested in and would have taken him a few spots earlier. The guy with Gibson traded up from 2.12 to 2.09 and I fretted it was for Robinson, but things worked out. Thornton was drafted by the Patriots, which isn't a selling point.

Allgeier might be an early starter in Atlanta, but landing spot is the best selling point; he's a fifth-round pick with 4.6 speed. Dallas might need to get Tolbert on the field early, depending on Michael Gallup's recovery. Shakir was quick and ultra-productive at Boise State and will be working with Josh Allen, which is exciting; Diggs and Gabriel Davis can't catch everything. Robinson is small and goes to a Giants team overloaded with wideouts who they're kind of stuck with; depth chart uncertain but it just feels like he has a lot to fight through. And did I mention he's small (5-8, 178).

Drafting a quarterback selected in the NFL's third round feels like a waste of both a draft pick and a dynasty roster spot. Stars from the last 45 years are Joe Montana and Russell Wilson; that's the list. But maybe Davis Mills works out, and both Willis and Ridder off the running dimension that could make them better fantasy prospects than NFL ones, for however long they're in the lineup. I took Ridder, in need of a quarterback behind Kyler Murray, but expectations need to be kept in check. He's more of a finished product than Willis, albeit with less upside.

Ross and Doubs join those aforementioned franchise quarterbacks, and maybe they emerge as go-to type players. Ross went undrafted out of Clemson due to a worrying injury history (spinal surgery, that sounds bad, and a foot injury). Doubs looks a little more promising as a potential slot option in Green Bay if Aaron Rodgers can be distracted from his devotion to Randall Cobb.

With late third-rounders, you're looking for players you might have to fight others for once the draft is over and the waiver wire opens. Ingram steps into an Arizona backfield with little behind James Conner; on the other hand, he was just a sixth-round pick. Corral was the fourth quarterback selected in a weak class, but at least he only has to beat out Sam Darnold. I took Dulcich, an athletic UCLA pass catcher who Nathaniel Hackett seemed excited about, plus the Broncos have an opening on the TE depth chart with just Albert Okwuegbunam there. A New England running back seems like more trouble than it's worth, but they're always just one fumble or missed blocking assignment ahead of them away from a featured role.

That's the draft; let me know what players you think we took too early, too late, or overlooked completely.