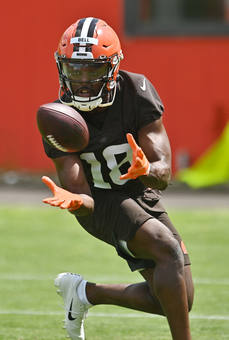 There won’t be another Amon-Ra St. Brown this year. It’s rare for lightly-regarded rookie receivers to make much of an impact. But if there’s somebody who’s got a little bit of that in him, it likely will be David Bell.

Bell ran a 4.65 at the combine; that contributed to him almost falling to the fourth round. But he was very productive in his final year as a collegian, catching 93 passes. And multiple reports in the last month suggest that Bell thus far has exceeded expectations for the Browns.

Cleveland has Bell working out of the slot, and he seems like a good fit thus far. By his own count, he says he dropped only one pass during all of their spring workouts, and that’s a continuation of how he played at Purdue, where he dropped only 11 of 243 catchable passes (not his own count). In comparison, the first three receivers selected in the draft dropped a combined 20 of 247 catchable passes last year.

"It's simple — get open and catch the ball, compete in the run game and do something with the ball in your hands after the catch," wide receivers coach Chad O’Shea said in an article posted on the team’s website. "Those are the things we're going to evaluate him on. It's a simple formula for us, and if he's able to do that for us, he's going to have a lot of value for our offense."

The Browns traded for Amari Cooper; he’ll almost certainly be their leading receiver. And they’ve got Donovan Peoples-Jones and Anthony Schwartz, who both have a lot more ability to get downfield for long catches. But Bell potentially could be their slot guy, catching plenty of short passes. I think he can fill that kind of role more effectively than Peoples-Jones or Schwartz.

"Speed is one thing, but there's so many things that go into being a great receiver," O'Shea said. "It's body control. It's an ability to understand where you are on the field and have sideline awareness. All those things are critical in the development of a young wide receiver, and he certainly has a lot of those things that we're able to work with."

Note that there have been other receivers who’ve tested poorly who have been very productive in college, and some of those guys have gone on to spectacularly outperform their draft position. Keenan Allen, Cooper Kupp and Jarvis Landry, most notably, all ran slower than 4.6 and slipped in drafts, but all have had 100-catch seasons. There are certain guys who just have a knack for how to play the position.

So put Bell on the list of players who’ll deserve a look in the practice games. At the same time, overall expectations should be modest. I’m very confident the Browns will put up bottom-5 passing numbers when Jacoby Brissett is at quarterback (which could be the bulk of the season). And it’s also rare for receivers selected late to make much of an impact early in their careers.

In the last 20 years, only 20 wide receivers selected after the first two rounds have put up top-50 numbers in their first season (using PPR scoring). Only 12 of those receivers were drafted even later than Bell. In the chart below, the receivers tagged with black dots were picked in the third round, but were chosen earlier than Bell, who went 99th overall.

So while I’m interested in seeing what Bell can do, I don’t expect at this point that I will be considering actually selecting him in any 2022 drafts this summer.