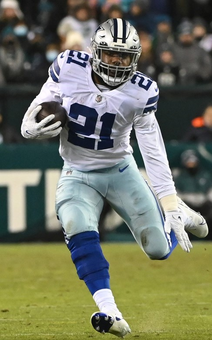 We've been talking some about workhorse running backs in recent weeks, how some of the busier backs one year fared a year later. Runners with 300 carries, or 370 carries, etc. Somebody asked about 370 touches (carries and also receptions), so here are those numbers.

The 370 figure seemed a bit arbitrary, so I went with 350 touches. There were two running backs who hit that total last year, Najee Harris and Jonathan Taylor. What are the odds those players will fall off sharply in 2022?

I looked at the last 15 years of players, rather than 20 (to keep the list more manageable). That kind of workload used to be more common, and there used to be a lot of running backs who were able to follow up that kind of season with another big one. More recently, the only back who's done it year after year is Ezekiel Elliott (and that workload seems to have taken its toll).

In the 10-year period from 2006 through 2015, 33 running backs put up 350-touch seasons. An impressive 19 of them (nearly 60 percent) came back and finished as top-12 PPR running backs in the following season. That includes a lot of NFL (and fantasy) legends doing it multiple times: LaDainian Tomlinson, Matt Forte, Ray Rice, Adrian Peterson, plus a couple others. It used to be relatively commonplace, making those guys first-round picks and league-winning running backs year after year.

Over the last five years, running backs who record 350 total touches are less commonplace; higher usage of one-two punch backfields and third-down backs, and perhaps more injuries. Whatever the reason, since 2016 there have been only 10 350-touch running backs, including the two from last year. Of those previous eight, four finished as top 12 fantasy backs one year later, but just two different players. Saquon Barkley did it in 2019, after his huge rookie season. And Ezekiel Elliott did it three times, following big years in 2016, 2018 and 2019.

In the table, which shows seasons following 350-touch seasons (and the run-rec-TD-Touch stats from those previous years in parentheses), top-12 fantasy backs are in bold.

For me the takeaway is that big seasons from 350-touch running backs are certainly less common, but so are 350-touch seasons, period. Elliott proves that there's no reason a workhorse back can't come back and put up big numbers a year later, there's just the back of your mind concern that those guys might burn out sooner (and start running into the injury issues we've seen with McCaffrey and Barkley, and perhaps the performance decline we're seeing now with Elliott). But in 2022, I have no problem selecting Taylor and Harris atop draft boards. A year or two from now, well, we'll see.