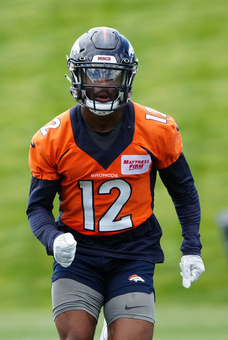 Who steps up with Patrick gone?

The tricky part with ranking the Denver wideouts has been the reality that all three of them -- Courtland Sutton, Jerry Jeudy, Tim Patrick -- have flashed potential of being the best of them. And then there were two: Patrick is done for the season after tearing his ACL in practice yesterday.

Devastating blow for Patrick, but opportunity for other players. Certainly, Jeudy and Sutton will have to do more, taking a few of the 79 and 85 targets that Patrick soaked up the last two seasons (resulting in eerily similar stat lines of 51-742-6 and 53-734-5). And there will need to be a new No. 3 in the passing game.

KJ Hamler is the favorite. He caught an 80-yard touchdown in the preseason last year, before missing most of the season with a torn ACL. He's been practicing at camp, and should get first crack at a top-3 spot.

But let's throw another hat into the ring, in fifth-round rookie Montrell Washington (pictured).

Like Hamler, who's listed at 5-foot-9 and 178 pounds, Washington is small (5-10, 170), and fast. He might might have been selected primarily for what he could bring to the return game. At Samford, he handled both punts and kickoffs, with 5 career touchdowns -- 3 last season. Those responsibilities will probably be on his plate, but his college coach thinks he'll bring a lot more.

Reports from training camp have been positive too. "He has worked so hard," Nathaniel Hackett said. "I don't think anybody really knew where he was going to put himself within the wide receiver rotation. He is a guy that Russell [Wilson] has latched on to and really tried to push with the rookies being around here. We're excited."

Helping the Broncos as a reserve receiver (and perhaps occasional runner) and return man doesn't guarantee fantasy relevance, of course. What are the chances of a fifth-round wideout making any kind of NFL impact? Actually, there were a few more examples than I was expecting.

Table shows all top-50 (PPR) seasons by wide receivers drafted in the fifth round this century. Tyreek Hill is the crown jewel, and he fell in the draft for off-field reasons. But there have been other hits, including three other top-25 (and a top-40) wideouts just last season. Those players are listed in bold.

The Patrick injury, and his college coach loving him (plus Hackett's positive words), aren't enough to merit actually drafting Washington anywhere just yet. Hamler, with the extra preseason of experience and being an earlier selection, should be considered the favorite to step into the top 3, with Washington more of a longshot.

But we'll see. I added Washington in dynasty yesterday (Hamler was already rostered), and I'll be watching him in August. Stranger things have happened. He wouldn't be the first fifth-rounder to turn into a significant player at the position.