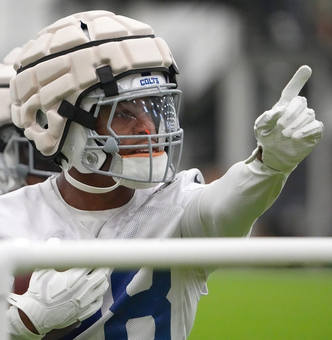 Is 1st pick the best?

Questioning appeal of being No. 1

I saw a Tweet from a fantasy guy I follow yesterday saying that if you have your choice of draft selection, don't overthink it, pick No. 1. I understand the sentiment, but I have mixed feelings about it. These have been strengthened by an experts draft I'm picking in right now.

I randomly drew the No. 1 pick in a FanEx Draft, which is taking place online at this link. It's a 12-team league, PPR scoring, that starts 1 QB-TE-PK-Defense, 2 RBs, 3 WRs, and a RB-WR-TE flex.

Picking No. 1 this year, the most common selection is Jonathan Taylor. Some will instead take Cooper Kupp (which I thought about; he lapped the field at WR last year and I expect him to again be the clear No. 1 this year, with Stafford's elbow my only slight concern), and a few will take Christian McCaffrey (if they ignore any injury concerns; it's true that anyone can get hurt). But Taylor is the favorite, and that's who I took.

My problem is that I think I would have been equally happy with most of the next 7-8 players as my first-round pick. I love Ekeler, I love the Top-3 wideouts, and my affinity for Najee Harris (lighten his load for Benny Snell or Anthony McFarland, sure, whatever) is well-established. I could even consider McCaffrey, Dalvin Cook or Derrick Henry. Am I certain Taylor will be better than all of them? I am not. I just like him a little more. And maybe I'd be happier having one of them, and a much better second-round pick.

Instead, I found myself taking Taylor and then sitting there hoping my picks at 24-25 would be players who instead got drafted between picks 14-23. Swift, Mixon, Keenan, Chubb...those are some nice second-round picks.

At picks 24-25, I was looking at 2 wide receivers, 2 running backs and a tight end who in my mind look like third-round picks. Tee Higgins, Michael Pittman, Leonard Fournette, James Conner, Mark Andrews. I strongly considered the running backs. I passed on Andrews because I like the depth at tight end; think I'll be happy with the one I take a couple of rounds later. Fournette and Conner were awesome last year, but I expect some touchdown regression, or injury, or maybe the teams going to more of a committee this year. So instead I took Higgins and Pittman.

Straight off our rankings, Higgins and one of the running backs would have been the way to go. Pittman is more of a late third-rounder. But picking at the end the round, you're kind of forced to go a little early on players you like. He certainly wouldn't have been there two rounds later. That's the negative of either having the first pick or the last pick. Yes, you get the first selection in either every odd or every even round. But the gap between picks is huge. I look at the teams picking in the middle of each round and I'm liking the way they turned out.

Anyway, I have my top running back and a pair of top-10 (I think) wideouts. When the draft finally worked its way back to me, I had a few different running backs in mind, including Dillon and Montgomery, taken on the way back to me, and Josh Jacobs, who I took. There's a little bit too much skepticism about Jacobs, in my opinion. He's not getting traded. Kenyan Drake is terrible. Zamir White will be a really nice (and easily obtainable, I think, but we'll see) backup. But it's Jacobs' job this year, and he'll probably be used heavily until he's allowed to walk a year from now.

I didn't really want to take a quarterback, but there's 2-3 I like above all others, and I didn't think any of them would survive another 22 picks. So I took our top guy, Herbert. Indeed, four more quarterbacks (so far) were drafted before we've reached my next picks.

Update: My turn at the end of the 6th/start of the 7th came up. Straight off our rankings I could have taken both players with my last picks (though I'd have taken Schultz instead of Hockenson), so I'm pretty pleased.

Draft to think point presented below. Feel free to rip or question any picks. I'll probably update it again next week (full draft can also be seen at the link above).