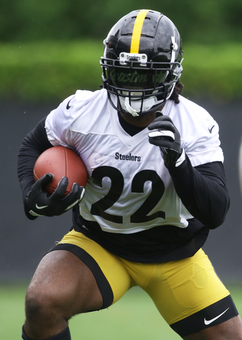 28-round draft shows who's popular

I participated in a best-ball draft last week. $35 entry, an online slow draft with a 2-hour clock at the Fantasy Football Players Championship at myffpc.com. Some people do dozens (or more?) of these leagues; I stick to one or two. I'm playing with house money from a previous win, so the goal is to keep the good times rolling.

The full draft board can be seen at this link. (I think; please let me know in the comments below if you can't see it.) It goes 28 rounds, 12-team league, PPR scoring, with a TE-premium (1.5 points per tight end reception). Lineups include 1 QB, 2 RBs, 2 WRs, 1 TE, 1 PK, 1 Defense, and 2 RB-WR-TE flex spots. That helps to explain the early and often tight end selections; whenever I've done well or one an FFPC league in the past, it's almost always because I have 2 or even 3 TEs in my lineup on a regular basis.

Some comments about my team; you can weigh in below where you think I've gone wrong.

I was very surprised to get Harris at 1.11. I might have taken him 5th; the only running backs I would definitely take ahead of him in a PPR league are Taylor and Ekeler. And that's it. Had Harris been gone, I'd probably have taken Mixon, so I didn't have to think much about the choice at 2.02. I do, however, really like both choices on either side of my Mixon pick, Pitts (who I wasn't about to take over Harris) and Swift (who could potentially be better than Mixon).

A wide receiver would have been an option instead of Mixon, but I don't love any one member of that second tier of wideouts after the top 3. Nine wide receivers went between Mixon and my pick, Pittman, and I believe he's right there with almost all of them and ahead of several. I was hoping for Higgins, who went one pick before, and would have considered Allen.

As noted, TEs are important, and starting 2-3 of them each week is viable. Spoiler, we have Schultz as our No. 3 tight end. I personally have him 4th (behind Pitts), but like him more than Waller or Kittle, so he was a pretty easy choice here. At 5.11, I was hoping for Herbert, which didn't happen, but Burrow (as the 6th QB) is fine. Had I waited on a quarterback, 5 more would have been gone by time I came up at 7.11.

Goedert and Ertz were both viable choices at 6.02; I think we have Ertz ranked higher actually. But I opted for the younger player. In a typical league I wouldn't have taken a 2nd TE this early, but with 1.5 per reception and the 2 flex spots, he's way more likely to be a weekly starter, I think, than all the running backs and wide receivers who went after him.

Harris is a top-15 running back on our board, yes even in PPR. Taking him at 7.11 as the 29th running back off the board is highway robbery, in my opinion. Virtually every running back taken the next two rounds is a backup or in a comically large committee.

Renfrow and Lazard are both examples of players who are probably going to end up on a lot of Fantasy Index teams. They show up at 25th and 20th in our PPR wide receiver rankings, and I took them here at 36th and 43rd. Lazard is actually higher on our board, but I figured there wouldn't be much interest. If he's Green Bay's No. 1 wideout, as we expect, he'll be the steal of the draft. A note: I expect the average fantasy player will look at my top 3 wideouts of Pittman, Renfrow and Lazard and be unimpressed, to say the least. I'm trusting the rankings, which say that through nine rounds I've got a top-5 quarterback, three top-15 running backs, three top-25 wide receivers, and a pair of top 10 tight ends.

The upside pick for a second quarterback would be someone like Trey Lance. My preference in best-ball leagues is someone who's going to start every game all season. Carr has his best receiving corps, but I don't need him to be a top-10 quarterback. I just want top-15 and someone in no danger of being benched and minimal danger of being hurt. Cousins is the other quarterback I'd have selected; zero interest in the other 5-6 quarterbacks selected.

Engram is our 13th tight end in PPR, so when he was there after 20 were gone I had to take him. I really didn't need to draft any more tight ends after him, though I did anyway. Hines as the 44th running back (we have him 30th in PPR) also felt like a nice safe choice, though I'm envying the James Robinson pick a round later on reports he's making an impressive recovery. Oh well. With Meyers I just really needed to add a wideout and I think he's got the best chance to put up usable weekly numbers in New England. I don't love him but it's round 13.

Couldn't resist a 4th tight end in Cincinnati's starter after 24 were off the board. Again, if 3 TEs make my lineup in this league, and they might, there's a decent chance I'm doing well. There was a run on kickers with seven going before I took Folk, and seven more after I took him. With my being a little nervous at wide receiver I was glad to take Palmer, who at worst will be Justin Herbert's No. 3, and if either Allen or Williams gets hurt he'll be a breakout star. Dallas was the No. 1 defense a year ago and I love them in best-ball, with their interception and TD potential. Colts were my other consideration.

Had to have another reliable kicker, with 17 gone and 7 more after I took Joseph. Robinson and White should be immediate No. 2s (I'm not sure Kenyan Drake makes the Raiders) and Robinson might be in a tandem, you never know. With Garoppolo, I wanted a 3rd quarterback who might start all year, so I picked him (QB29) ahead of the six drafted in the next four rounds who I'm not sure will start more than half the year. I think Garoppolo winds up starting somewhere, either in San Francisco if Lance is shaky in August or some other QB-needy team. I suppose Mariota would have been "safer."

Looks like someone has been through here with the ugly stick. Minnesota is a top-12 defense I think, I'm very comfortable with them and Dallas as my duo. I don't think much of a Watkins but it's the 23rd round and he's the 83rd wide receiver drafted, I think that's a pretty good price in best-ball for a guy who will probably be Green Bay's top wideout in some weeks. Kyren and Samaje could be 3rd-down guys on their teams, having selected Mixon I was particularly interested in Perine. I realize they have Chris Evans, but Perine is a safer insurance policy. I won't lie, I had been considering Velus several rounds earlier. Chicago's passing game has no real appeal but that also gives him the chance to be their No. 2 wideout. And it's the 26th round.

I didn't really want or need a 5th tight end, but Bates was the last guy left in my queue when my pick came up and I think he could be viable in Washington. But in retrospect a smarter choice would have maybe been almost any other position, including a 3rd kicker or Defense. (Though I disagree that 3 of each is necessary in these best-ball leagues.)

Selecting Willis in the 28th round is as flier-y as fliers get. I don't think Willis is necessarily starting any games this season for Tennessee, but I wanted to take a chance on a fantasy home run in the last round, even if odds are a lot more likely he's a strikeout. If he starts some games late in the year, he could be running for 70-plus yards a game, who might help me win a lot more than any other position player I could have taken.

Feel free to praise or rip below, I can take it.