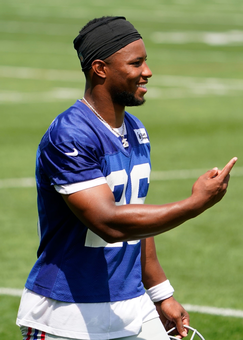 Saquon Barkley is going to be an interesting case in fantasy drafts this month. No one disputes the talent, but he's been an injury-prone disappointment his last two seasons. With a new coaching staff and offseason to rest up, can he deliver strong numbers?

There is increasing optimism. In the Experts Draft back in May, he was the 15th running back selected, in the middle of the 3rd round. In the one I'm participating in right now, he was drafted at 1.12, behind only six other players at the position. In general, I think we'll keep seeing him selected in the top 15 or so picks in PPR leagues.

Barkley played the opening series in last night's Giants-Patriots game, touching the ball five times -- 4 carries (for 13 yards) while also catching an 8-yard pass. It's that latter opportunity that's key to his appeal as a possible first-round (or at least early second-round) pick.

If you select Barkley, it shouldn't be with the expectation he's going to be cranking out 100-yard rushing performances and lots of short touchdowns. The Giants have a new coaching staff and some skill guys of note, but this still looks like a rebuilding team that will lose more than it wins. Mediocre offensive line, questionable quarterback, and Barkley himself needs to prove he can stay healthy.

But factor in his receiving potential, and he starts to look more like a difference maker. Not to catch 91 passes, as he did as a rookie, perhaps, but to be one of the league's busier backs in that regard. In Brian Daboll's offense in Buffalo last year, Devin Singletary, Zack Moss and Matt Breida combined to catch 70 passes. Barkley should be more of a full-time guy, presuming he can stay healthy. He's been productive thus far in his career, when available.

During his four seasons in the league, Barkley is one of 48 running backs to see at least 100 targets in the passing game. With him missing a good chunk of games, for him it's worked out to nearly 6 targets per contest. That's more than all but four other players.

Just ahead of Barkley in this table, coincidentally enough, is James White, who retired yesterday. Life moves pretty fast. But while it seems like Barkley has been around forever, he's just 25 years old.

As long as you're comfortable thinking Barkley should be available for most of the season -- and it's entirely possible we won't see him again this preseason, after last night's brief appearance -- I think selecting him in the early to mid second round makes sense, thanks to that receiving involvement.