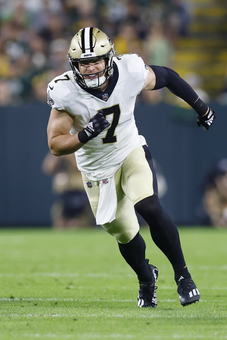 Honestly, I hadn’t thought about him too seriously. He started some at quarterback last year, there have been weeks where he’s been a gadget guy, and there have been weeks where he didn’t do much at all. Dennis Allen in the offseason at one point indicated Hill’s days as a utility-type weapon were over. On the team’s website, they had him listed as a tight end, then moved him to quarterback, and now have moved him back to tight end. They’ve got Andy Dalton, and I’m pretty sure Dalton is the No. 2 quarterback there. So I haven’t been sure exactly how Hill would fit in.

But now that you bring him up, let’s look at the numbers. With one game in the books, we can make more of a stab at what he might be.

Below show a table showing Taysom Hill’s last 17 games in which he played in the game but not as the starting quarterback – a season’s worth of work in that gadget/utility role.

The passing stats aren’t significant, so I didn’t even list them (12 of 14 passing for 112 yards, with no touchdowns and 1 interception). Rushing I see 415 yards and 8 TDs; that’s 24 yards per week. And receiving I see 12 catches for 134 yards and a touchdown.

Last year there were 11 tight ends last year who started at least half the season and averaged at least 10 points per game (using PPR scoring). Hill has hit that level in 6 of his last 17 games – about a third of the time. So maybe I’m underestimating him. Let’s see what he does on Sunday, and I will more carefully adjust the numbers for the next Redrafter. Maybe I’m late to the party on him and he should be listed in the teens among tight ends.

Why are you ranking Kenneth Walker III so low? Before his hernia problem he was the supposed backup to Penny. Everyone was pretty high on him given Penny's injury concerns.

He’s not the supposed backup. He’s the backup. And they say he’s playing this week. He underwent a hernia procedure in August, but they say he’s good to go now. With running back being a physically demanding position, I would expect he’ll start some games at some point this year. At the same time, the Seahawks have a couple of other capable backups in their two Miami guys (Travis Homer, DeeJay Dallas). If Penny gets shelved at some point, I would think they’d also be worked in some, having worked in this offense more and having a better command of what to do in passing situations.

Now that we've had a week to watch Aaron Rodgers and the Packer's offense, do you have any better sense who their stud receivers will be? Lazard, of course, missed the opening game but the rookies like Doubs and Watson played quite a bit along with 2nd-year guy Winfree. The veterans, Watkins and Cobb, also got a few looks. Everyone saw Watson's terrible drop in the 1st quarter, and he had another where he turned late resulting in an interception, but Rodgers kept throwing to him. Although it's a small sample size, given that Watson has good size, and was a 2nd round draft pick, I'm betting he has the best chance to step up. The other one that surprised me was Tonyan as he seemed to be getting more TE looks, especially late in the game, than Deguara.

Watson also had an end-around in that game. He has size and athleticism that none of their other receivers have. Looks to me like I guy who will evolve into an NFL starter for sure; it’s just a matter of how long it will take. I’m very interested in stashing Watson with a reserve spot on my roster.

In my most competetive league (PPR), believe it or not, I took Mixon at 7 then Jamarr Chase fell to me on the way back at 18. I took him obviously but hated having both Bengals together. I was torn between Chase and Kelce on way back BTW. Should I consider trading Mixon away for say, Swift? Or just hang and accept RB1 and WR1 from same team?

I would stick with those guys. While it might seem like you’re putting too many eggs in your orange and black basket, it actually might make your team more balance. If there’s a week where Chase puts up 140 yards and 3 TDs, that probably will be a week where Mixon doesn’t finish with great numbers. And if Mixon has a game with 120 yards and 3 TDs, that probably won’t be a great week for Chase. I don’t think there’s anything wrong with having two of the big guns in one of the few offenses that might average 3 TDs per week.

Isiah Pacheco - have you seen/heard anything of note that gives you hope he could take over a relatively unsettled backfield and be something more than a committee contributor? I know the odds are against him considering his draft capital and experience.

He had a nice opener, popping a couple of runs in the fourth quarter. I don’t think there’s any way that both Clyde Edwards-Helaire and Jerick McKinnon are playing in all 17 games. In the weeks that one of those guys is out, Pacheco will should be a decent second back.

How many QB revenge games remain this season?

Deshaun Watson has the big one, assuming he’s cleared to return for that game at Houston. Carson Wentz has three of them (a pair against the Eagles and a game at Indianapolis in Week 8). Famous Jameis is slated for two against the Bucs, and Kirk Cousins will see Washington in November. If Geno Smith is still starting in Week 17, he gets the Jets.

Ian, this is not a critique of your fine and I assume time consuming work. I know you spend alot of time doing analytics. But I am wondering how much of the Cooper Kupp element do you put into your predictions? What I mean is there were no numbers to suggest what he did last season. The one thing that struck me early last season was the news that Kupp and Stafford met for breakfast every morning just to talk football. This is now common knowledge and was part of the reason for their success, don't you think? I guess my question is do you think the Davante Adams/Derek Carr connection could be special because of the bond they had in college? Sorry for the length of this post, but you get my drift.

Justin Eleff is a big fan of this stuff. He points out that Braxton Berrios and Zach Wilson seem to hang out together. That when Wilson is at an Islanders game or a concert or a book club, Berrios is always there with him. I think Justin had one other one, but it escapes me right now. There’s definitely a connection between Jalen Hurts and A.J. Brown. I think A.J. Brown was at Jalen Hurts’ daughter’s birthday party (and I think that occurred BEFORE the trade).

I purchase your preseason cheatsheets every year and access them via the website. Can you post the Dynasty rankings on the site? Or am I missing them on there somewhere?

Dynasty rankings appears in each of the newsletters that went out on Thursdays in August. Once we get into the regular season, we published dynasty rankings every Saturday, rotating between the four notable positions. I’ll start with QBs this week.

How do you determine the top 30 rankings for our customized scoring systems? I appreciate that it is not just total points based. As always you guys are the best!!!

It’s numerically based. You make an assumption about what you might get in the 10th round – the best player at each position when we’re getting down to backup guys where interest is starting to wane. In auction terms, you make an assumption about the best player you can buy for $1. For the better players, you look at how much they give you beyond those baseline guys. If Justin Herbert projects to score 200 points more than what we think is the $1 quarterback, while Leonard Fournette projects to score 150 more points than our $1 running back, then we can conclude we should be drafting Herbert before Fournette. (Now, if the guys in your league don’t draft quarterbacks early, you’ll have to figure out how to factor that in.)

Do you offer weekly position rankings? If so, are they free? I don't see them anywhere on your site.

Yes. We put together rankings and projections for every team and every player for every game of the season. We have the usual expectations for each player, but those need constant adjusting, and then they need to be bent each week to account for the matchup. To see a sample of our work, go to the “store” area of the website.

Would you trade Lamb for someone like Sutton or JuJu?

That was an underwhelming opener (catching only 2 of the 11 passes thrown his way). It’s worrying. But my leaning would be to give him the opportunity to shoot his way out of his slump.

Remember Washington in 1991-1992 and how dominant they were? I had Mark Rypien, Gary Clark, and Gerald Riggs. One game vs the Falcons, Rypien threw 6 TDs AND ran in 1 TD! Unbelievable! Did you like fantasy football more back then? I did!

I remember the game. Jerry Glanville kept blitzing, and Washington totally had it schemed up to take advantage.

I have Michael Gallup in both a 10 team keeper league (we keep 12 players) and a 12 team re-draft league. Is he worth keeping around for this season with the Dak Prescott injury?

I don’t think you were counting on anything from Gallup in September anyway. By the time he’s rounding into form in mid-October, Prescott could be back in the starting lineup.

I play in an odd league. First of all, only 6 teams. Touchdown only, short TDs worth 6 pts, medium worth 9, and over 50 yds worth 12. The kicker is that if an RB catches or throws a TD, QB runs or catches, or WR/TE runs or throws, points are doubled. So players like J Allen, Ekeler, and Deebo are kings in our league. What other players would you move up in this format?

In general, I would be looking at pass-catching running backs (including Ekeler, Hines and McKissic) and at running quarterbacks. To get our exact projections, run the numbers through our custom rankings feature. To do so, first output a quarterback list, with rushing touchdowns doubled. Then run a separate accounting for running backs, with passing and receiving touchdowns doubled. I don’t think there will be much there at wide receiver other than Deebo Samuel.