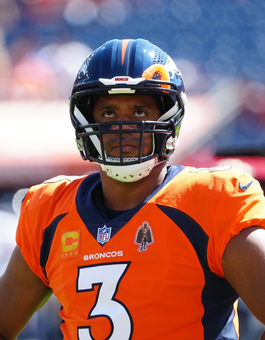 All off season we heard "Let Russ cook"... Seems more like "Russ is cooked". Your thoughts? Will he get it straightened out or is it time to look for an alternative?

I was watching some of the Houston game yesterday. It was painful. The crowd was into it. They showed up ready to watch Wilson carve up the Texans – it had a feed-the-Christians-to-the-Lions vibe. And the Broncos just sucked the life right out of the building. They were using the full 40 seconds on every play, with a lot of standing around, short gains, penalty conferences, and Wilson holding his helmet, listening to plays coming in. They were boring. I imagine they’ll get some of those issues figured out, but there’s also the issue of Wilson simply not being the athlete he’s been in the past. He can’t escape from pass rushers I like he did in the past, and that used to be how he would create his best plays. When he was in his heyday, Wilson typically would use his mobility for some key plays in the fourth quarter, squirting forward for a 25-yard run. He’s not that guy anymore. And the preseason narrative that Sutton-Jeudy-Patrick would be a big upgrade over Lockett-Metcalf, I don’t see that. I wouldn’t want to be using Wilson this week, not with the 49ers having a defensive line that can get after him.

What kind of production do you think Watson will have the remainder of the year when he is activated?

When he’s dialed in and in the right offense, he’s a top-5 quarterback. But I don’t think he’s going to hit those heights this year. He didn’t look good in his preseason appearance in Jacksonville. And I would think it would be difficult to focus and perform while dealing with the distractions of heckling fans and media questions. The Browns have a limited receiving corps and rely more on the run than other teams (two years in a row, they’ve ranked 27th in passing). And Watson hasn’t played in two years. So when he comes in for those final six, I would think we’re looking more at top-10 quarterback. Maybe averaging 240-250 passing and 20-25 rushing yards per game, with perhaps 10 combined touchdowns in those six games.

Can you provide some insight and detail on your redrafter ranking of Elijah Mitchell? In my custom rankings, you have him at 26, and standard scoring he's at 31. Isn't he out for a couple months?

There is no official timeline on when he’ll return. That was some initial speculation of him maybe missing a couple of months, but we’ll see. It’s a sprained knee, so I’m not ruling out the possibility of him returning in October. If he’s out an even two months, that would put him in line to return for the final nine games of the season. On the other hand, with Mitchell having undergone knee surgery in the offseason, maybe there are additional issues that I’m not aware of, and he simply doesn’t get back to full strength and confidence this season. I know that he’s a good player. If he gets back in the starting lineup for the 49ers, I definitely want him. So I would rather have Mitchell on my roster than some nominal producer with limited upside.

It’s reasonable to move guys up and down. I work on my list constantly, with an auditing of each player after each game. With Barkley, I give more weight to the first game. I saw some great runs, and I saw a great back. He’s got it. That wasn’t a case of Average Joe happening to run through a couple of big holes. The last game served as a reminder that the Giants are a lesser team that will struggle at times, but Barkley is clearly in a much better place now than he’s been the last few years. He’s going to have a big year.

Hi Ian, I'll get right to the point: Cole Kmet, what the hell? What happened to all the short, safe passes he was supposed to catch from Justin Fields? He's caught as many of those as I have in the first two games. Not exactly what I had in mind for a sleeper pick at tight end...more like sound asleep. Any chance this changes? Otherwise he'll be gone from my roster before week 3 starts.

I just cut him from a roster a half hour ago. But my intention is to re-sign him at the minimum salary next week. I think he’s a good player. The Bears aren’t going to go through this season completing 7-8 passes per game. When they get to where they’re passing for about 225 yards and a touchdown per week, I think Kmet will be a viable tight end. Some chance he eventually becomes that top-10 type tight end I thought he was going to be when I saw him catching balls in the preseason.

My Mom is in a pick the winners only pool at her retirement community. You pick the winners and assign a point value to the picks. The more confident you are, the higher the point value. For example, KC would probably be a 16 to beat Indy this week. Can you, or any of my FFI family, recommend any web sites she can use for help?

I would think we could start with the point spread each week. That puts the games in an approximate 1-16 order each week. Then you would make adjusts to work in your own personal preferences. That would be the essence of the game (where you get to show that you see something that the others are overlooking). I would not use my 16 chip on Kansas City this week. I still think the Colts are going to win the AFC South. They’re playing at home and kind of backed into a corner somewhat, with pressure building for them to play a good game.

Suggested trivia question: Name the three NFL teams that have had a different opening day starting QB for each of the past five seasons.

Good suggestion. Thanks. Two of the teams have a decent chance of having another new starter in 2023, I think.

An owner in my league lost Dak and Lance already. He wants my backup, Stafford. He has offered me Dak, Mike Williams, and Kyle Pitts for Stafford, friermuth, and Allen Robinson. Is this fair, or should I try and get Gabriel Davis from him?

Fair. I think that’s the word. It’s a deal that seems to benefit both sides. By the time Patrick Mahomes has his bye in Week 8, Dak should be healthy. So you’re not giving up too much there. And you pick up a couple of modest assets. You get to switch to Mike Williams at wide receiver, not having to worry about Allen Robinson. And if Pitts starts playing like he’s supposed to, you could make a nice step forward at tight end. But I can’t guarantee Williams will be better than Robinson, and I can’t promise Pitts will outperform Freiermuth. If you want to try for Gabe Davis, I suppose it doesn’t hurt to ask. But I would make the deal.

Was offered Derrick Henry for Deebo. Currently have Deebo, Chase, AJ Brown, and London with Najee and Rhamondre as RB2. Where it gets tricky is someone just dropped Godwin (for Josh Palmer) and I have been holding on to number 1 waiver priority. Does stashing Godwin justify letting Deebo go?

I would not want to make a deal for Derrick Henry. At 28 and with 8,570 total yards on the odometer, I don’t think he’s quite the back he’s been in the past. And he’s working behind an offensive line that’s gone from being a strength to a glaring weakness.

Hey Ian, please explain to us how some players are ranked higher in overall ranking yet their projected total pts would be lower in comparison to lower ranked overall players? I never did get that, as I use the overall rankings to place my flex player in that slot - that's not a QB. What does the OVERALL mean then?

The overall list is based on supply and demand. We start by setting a starting point on a nominal player at each position. The value for all remaining players is determined by measuring how much better he is than the starting point. Supposed, for example, that your baseline kicker is projected to score 100 points. But you think Daniel Carlson will score 150. Then Carlson’s overall value is 50 – 150 minus 100. At wide receiver, suppose our baseline guy is assumed to score 80 points. Maybe Jerry Jeudy is projected to score 140. So Jeudy’s value would then be 60 – 140 minus 80. Jeudy, therefore has more overall value than Carlson, even though he’s projected to produce fewer points. So when you see ordering across positions that you don’t like, it’s often tied to where the baselines are set on those starting point players. To adjust those choices, go to the auction values area of the custom scoring setup.

What do you make of Donovan Peoples-Jones? This season without Jarvis Landry and Austin Hooper, does DPJ eat up those targets, rec and yards?

The Browns ranked 27th in passing last year, averaging 213 yards per game. They were also bottom-10 in TD passes. With Jacoby Brissett at quarterback, I think they’ll be worse rather than better. I understand that Brissett looked surprisingly good against the Jets, completing 80 percent of his passes and moving the offense, but I think those kind of games are going to be the exception. So I would like Peoples-Jones be for now. When we get to where Deshaun Watson is about a week away from returning, that might be the time to file claims on some of the players like Peoples-Jones, with the thought they might be relevant in the final month of the season.

London and Samuel are catching lots of passes. They look like reliable options that can be used every week. With Aiyuk and Bateman, they might not be as consistent but probably have more potential to get in the end zone.