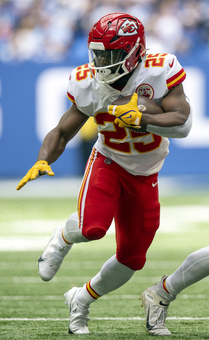 Which top performer is headed for a decline?

ASK THE EXPERTS appears weekly from training camp through the Super Bowl with answers to a new question being posted Thursday morning. How the guest experts responded when we asked them: Which top performer will cool off the rest of the way?

The one player is hard to pick. The top-8 running backs contain James Robinson, Clyde Edwards-Helaire, D'Andre Swift, Cordarrelle Patterson, Jamaal Williams and Khalil Herbert. That's six guys that mostly have injury histories and that opened the year with good matchups. Of the group, I'd expect Edwards-Helaire to again get injured and drop because the offense is more about passing and he'll miss out his standard three to six games.

It's a good time to shop James Robinson. The comeback story is amazing and inspiring, though a lot of his production is tied to long runs. That's an unsustainable business model. Travis Etienne's skill set might better fit when the Jaguars trail in some games. Let's be clear, I don't think Robinson is going to collapse, or that you should trade him at any costs. But this could be a peak moment where you can fetch maximum return. Surely several of your opponents are struggling with their backfields.

Saquon Barkley still scares me. He finally looks healthier and fresher after prolonged injuries in recent seasons. As the RB1 in fantasy this year, he's already put up about 80 points. However, the New York Giants offense still looks overmatched. The receivers are injured, disgruntled, and unproductive. Daniel Jones seems to have improved a bit, thanks to Brian Daboll, but he's still inconsistent. Barkley is their only real offensive weapon and it is hard to imagine him lasting the season due to New York's current over-reliance on him, and the probable overuse to follow. After some early wins, the G-Men lost a very winnable division game at home with a packed stadium on Monday Night Football against a backup quarterback. Troubling.

Josh Allen and Lamar Jackson are putting up insane numbers, but it doesn’t look sustainable, with their playing styles. They’re exposing themselves to a lot of unnecessary hits. That makes it unlikely, I think, that they’ll be able to make it through the 17-game season unscathed. There will be an untimely hit at some point, with those teams likely having to play some without their difference-making quarterbacks.

Greg Dortch, Zay Jones, and Mack Hollins are all top-24 receivers through three weeks, and none are likely to finish at these levels. Of the three, Dortch is the riskiest because his volume has come while both Rondale Moore and DeAndre Hopkins are out of the lineup.

There's been some surprising production thus far from the Washington Commanders, with Carson Wentz, Curtis Samuel and Antonio Gibson all putting up starter-type numbers to this point. It's not sustainable, and this week (at Dallas) should be the first rude awakening for these guys. Perhaps Samuel can continue to be a PPR asset with these short throws, but Gibson will fairly soon be losing work to Brian Robinson, and Wentz seems likely to inevitably either implode or get hurt (9 sacks last week is one indicator).