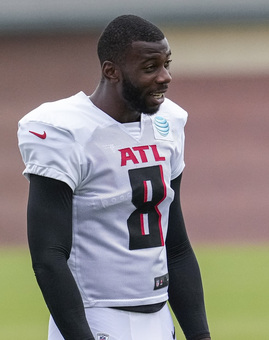 Which struggling tight end will turn things around?

Out of the Pitts soon

ASK THE EXPERTS appears weekly from training camp through the Super Bowl with answers to a new question being posted Thursday morning. How the guest experts responded when we asked them: Which struggling tight end will turn things around?

It has to be Kyle Pitts, right? Atlanta has been fairly competitive so far, but they need more production to win games. Pitts is a true weapon and they have to figure out new and better ways to scheme him open and get him touches. Just look at his teammate, Cordarrelle Patterson. Other teams figure out creative ways to get their best players the rock, too, with the best example being Deebo Samuel in San Francisco. New Falcons coach Arthur Smith, had better get creative quickly as he has two beatable teams coming up in Seattle and Cleveland.

Does George Kittle count? Kittle will be back on the field soon, and while Trey Lance's injury is unfortunate, it does make Kittle's outlook much clearer since his elite seasons have come with Jimmy Garoppollo under center. While I don't think Kittle will contend with Travis Kelce, Mark Andrews, and Darren Waller at year-end, I do think he'll be an every-week starter that outscored the vast majority of the plug-and-play tight ends your league mates have to start.

There is just no way that Kyle Pitts continues on as the No. 32 fantasy tight end. He is as talented as any other tight end in the NFL and criminally underused. The opposing defenses so far -- the Saints and Rams -- have top coverage corners and they've applied their greatest focus on him and shut him down. But that's left Drake London to explode last week and the upcoming opponents will feature less formidable secondaries. But it is a reality that Pitts suffers until the quarterback and other receivers do enough to keep him from being cloaked on every play, and Marcus Mariota cannot just ignore his best playmaker.

Kyle Pitts is too talented to languish moving forward. The team needs him to produce and I believe they will find new ways to get him more involved. A breakout game is coming!

I feel like I'm cheating a little bit by naming Irv Smith, since he had a touchdown Monday. But he's still just TE18 in current scoring, so maybe he applies. He dropped a long second touchdown against Philadelphia. Adam Thielen hasn't been sharp in the first two games, so more opportunities could be coming Smith's way. Kirk Cousins is still a plus quarterback, even if prime-time games seem to regularly submarine him. Smith still has a plausible path to being inside the Top 12 at this weak position by season's end.

There was a two-game stretch last October where Kyle Pitts caught 16 passes for 282 yards and a touchdown, looking look he was going to transform the position. He’s a talent. Yet he’s caught only 56 passes in his other 17 games as a pro, and with no touchdowns. That’s just over 3 catches per week. He’s caught 2 passes in four straight games. And now Arthur Smith is playing the I-don’t-care-about-fantasy-I’m-a-football-coach card. I can’t explain it. This is an offense that’s woefully short on playmaking talent, yet they don’t want to use their best guy. But I don’t think it can last. I expect Pitts to move up to catching about 5 passes per game, and sooner rather than later.

The Falcons and Marcus Mariota have not figured out how to get Kyle Pitts involved in their game plan. Atlanta has to realize eventually that he is a major force for moving the ball down the field. Ball control has not been a issue for them so far. Unfortunately they have been playing from behind a lot and not willing to accept the small plays but instead have gone boom or bust. Once Mariota stops running so much and settles down, then perhaps Pitts can come back. It really isn't about Pitts flopping more like Atlanta stumbling.

I'd like to mention T.J. Hockenson, since I have him in a couple of leagues, but I'm not seeing it. He doesn't seem to be a focus of the passing game. So I'll go with Dawson Knox. He had a step in the right direction in Week 2, catching 4 passes, and there's no way opposing defenses coming up are going to let Stefon Diggs rip them up every week the way he did Monday night. I think Knox is going to start seeing lighter coverages and more balls thrown his way, especially in the red zone.