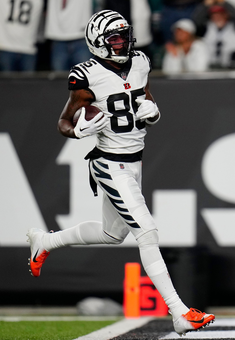 Bengals pull away from Dolphins

Kind of seems silly now that everyone was panicking when the Bengals were 0-2, right? I think this can be applied to fantasy teams that started out 0-2 or 1-2, too. It's a long season, and there will be a lot of ebbs and flows on the way. I still think the Bengals are the best team in the AFC North, and they have a lot of nice fantasy prospects, too.

The game itself was somewhat overshadowed by the scary Tua Tagovailoa injury, made extra scary by the cameras zooming in repeatedly on his frozen, awkwardly positioned hands as he lay on the turf. A little more distance would have been OK there. I get that Amazon Prime is new at this, but it was a little uncomfortable. Reportedly Tua was discharged from the hospital and is OK, but we haven't heard the end of this one, given the controversy over his leaving and returning to last Sunday's game after a head/back injury. Last night's incident highlighted the league's inconsistency with calling plays depending on the officiating crew and (I think) the quarterback. Tagovailoa was pretty much body-slammed to the turf and no flag was thrown.

Early on, it looked like it was going to be a very high-scoring game. Joe Burrow led the Bengals easily down the field, completing 4 of 5 on the opening drive before the entire offensive line carried Joe Mixon into the end zone for a touchdown. Burrow ended up (with a big pass late) throwing for 287 yards and 2 TDs, rewarding those who started him. For a lot of the game it looked like he'd finish with a modest 250ish and 1 TD sort of outing. Most comfortingly for those with Burrow, he was sacked only once, while getting the time to throw long completions to each of his top 3 wide receivers. That's 5 TDs, no interceptions, and just 3 sacks the last two games, after a rough start to the season in those sack/turnover areas. Next three are at Baltimore and New Orleans and home against Atlanta, none of which particularly daunting.

With Tua Tagovailoa, pre-injury it was a mixed bag. Miami's opening drive should also have been a touchdown, with Tagovailoa making some short, sharp throws (so weird to see a lefty quarterback these days, gotta be weird for defenses, too) and moving the offense well. Perfect throw to Chase Edmonds in the end zone which it looked like Edmonds tried to catch with his wrists, I have no idea what he was doing there.

On the other hand, Tagovailoa's second drive ended with an interception where he heaved up a deep ball for an open Tyreek Hill and the ball fluttered lazily into the defensive back's hands. I actually think he can throw those passes -- he did throw one later on that was closer to being completed -- but there needs to be a better hit rate of strong throws than wounded ducks to keep trying them.

After Tua was carted off (and it should be noted that on that play, he was slow to elude the pass rusher, with it looking like maybe there were lingering after-effects of last Sunday's injury), Teddy Bridgewater came in and led a touchdown drive where this time, Edmonds caught a little shovel pass and made a couple of nice spin moves to get in the end zone. Later, he had a perfectly thrown 64-yard bomb to Tyreek HIll that Tagovailoa probably doesn't make. But they wound up settling for a field goal (2 runs into the line of scrimmage and a Bridgewater pass play that was lucky not to end in a sack), and that was it for the offense. Bridgewater is a decent backup quarterback. They're not winning many games if he has to start for long.

Efficiency has been really, really ungood for Joe Mixon so far. He's at 2.7 yards per attempt on the season, and 2.5 last night. But I'm going to look at the positives, which are that that Mixon himself looks fine, running hard and taking on tacklers -- he didn't seem limited last night by the ankle injury he was apparently dealing with. And apparently Zac Taylor isn't worried about his feature back wearing down, because Mixon played all but 11 snaps last night; he's averaging 25 touches per game (21 carries, 4 receptions). It would be nicer if more of those carries near the goal line resulted in scores: last night he was carried into the end zone on the first series, stuffed on multiple carries the two other times the team got in close, resulting in a field goal and a short touchdown pass. But I'm looking for opportunities. Mixon is getting all of them. Samaje Perine and Chris Evans are barely stepping on the field.

Raheem Mostert is the main running back for the Dolphins. He's playing the most, he's getting the vast majority of the carries (and looking much, much better running it than Chase Edmonds), and involved as a receiver. Unfortunately, Edmonds is part of the red-zone offense and that's helped him score 3 TDs the last two weeks, while committing the ugly drop of yet another. If you can fool someone into thinking Edmonds is the best back here based on those scoring plays, go ahead. There is no chance it continues. Of course, as soon as you plug Mostert into a lineup he'll probably blow out his knee or something, but he looks pretty good so far. This doesn't have the look of a team that's going to score a lot of rushing touchdowns, however, limiting Mostert's value. But Edmonds doesn't look like a good start these days either.

So Tee Higgins was Cincinnati's star last night, just another game where he had a bigger performance than JaMarr Chase. They're both great, and Chase will certainly have lots of big games this season. But if defenses continue to focus on limiting him, it's Higgins who will clean up. It's a great duo and they're working with a great young quarterback; automatic starts each week. Chase was just a step away from a late touchdown, getting tripped up just short of the goal line.

Tyler Boyd is a quality No. 3, but the numbers are against him. The weeks opponents are able to limit both Chase and Higgins are going to be few and far between. Boyd has scored twice and went over 100 yards against the Jets; that's the good. But he's averaging 3 catches per game.

The reality with Miami having two superstar wideouts is that sometimes one of them will have the better night, better matchup, bigger game. Last night it was Tyreek Hill, a week ago it was Jaylen Waddle. It's frustrating, especially when you guess wrong in the kind of competitions where both are available, as with Chase and Higgins. Early on Waddle was seeing a few targets, one broken up and another where he seemed to have caught it but it was ripped out of his hands. After that, he was pretty quiet, with Hill dominating. Frustrating for those with Waddle, but it's not like you can bench the guy. Trent Sherfield caught 4 for 55 as the No. 3, a line that will presumably go to Cedrick Wilson when he's available. If Tyler Boyd is only barely usable, Miami's No. 3 is a step or two below that.

Roller coaster night for those of us who made the last minute decision to start Hayden Hurst. He caught 2 passes on the opening series, with another targets on Cincinnati's second possession. Everyone is feeling good. He then went almost the entire rest of the game without having a pass thrown his way, other than a reception erased by a holding penalty. Everyone's kicking themselves until the final minutes of the game, with Mixon getting stuffed and Cincinnati running a little counter pass play that left Hurst wide-open for an easy, yet still somehow awkward-looking, touchdown. Starting Hurst last night worked out, but I suspect I'll be benching him most weeks. Just not a key contributor in the offense, with three capable wideouts and a pass catching running back.

You were warned about Mike Gesicki. He's playing about half the time and averaging 2 catches per game. It's not clear why Miami still has him on the roster and is paying him franchise tag money. There is pretty much zero chance he ever catches 5-6 passes in a game again in this offense. The time to trade him (after he had that leaping touchdown in Week 2) has come and gone.

Evan McPherson might be the top kicker in the league for the next few years. Big leg, great offense, occasionally runs out of ideas near the end zone and willing to try long kicks. With six minutes left in the game and Cincinnati winning by 2 points, they brought out McPherson to kick a 57-yard field goal (so Miami would have had the ball near midfield had he missed. I think a lot of NFL coaches, maybe most, would have punted there. But Zac Taylor made the risky choice, and it paid off.

The Dolphins Defense has been a mystery to me so far. Same defensive coordinator as a year ago, many of the same players. It has 7 sacks and 1 interception in four games, after having 48 sacks a year ago and averaging an interception per game the last two seasons. And the matchups have been fine. Disappointing.

By all accounts, Mike McDaniel is a smart guy who his players love and has routinely impressed the media and team observers. But he's coming under a ton of criticism right now for how the Tagovailoa situation has been handled, and it's only going to get louder. I'm hoping it turns out that no missteps were made, but at this point it looks like wishful thinking. I don't know. I'd like to give the benefit of the doubt, but it looked like there was some carryover from Sunday last night, prior to getting knocked out -- particularly on the night-ending sack itself.