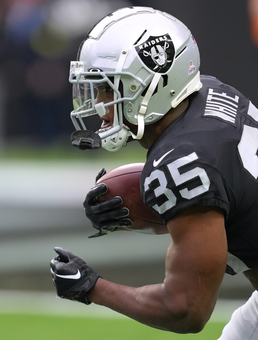 Ian Allan answers your fantasy football questions. In this edition: Zamir White's future as a starter. Settling disputes about player position eligibility. Is Justin Fields an elite quarterback? And more.

Does Zamir White have a path to start next season? I drafted him late in a keeper league and have been holding onto him, partly in the hope that he's the starter next season. But with Jacobs having the season he's having, do you think the Raiders will franchise Jacobs and leave White as the backup?

I remember Zamir White’s first carry in the preseason, at the Hall of Fame game. He came in on the second possession and busted one for 14 yards – finishing it strong. He ran the same way at Georgia, looking like a back who belonged at the NFL level. But we haven’t really seen much since that time. His remaining 24 carries in the preseason went for only 64 yards. He’s hardly gotten on the field in the real games. He had a 22-yard run as they were running out the clock in a comfortable win over the Broncos, but he’s got only 5 other regular-season carries, and they’ve resulted in a net total of minus-2 yards. Would be wildly surprising, I think, if the Raiders were to conclude they’ll be heading into the 2023 season with White as their starter.

Far more likely, the Raiders will be looking to re-sign Josh Jacobs. He’s been very effective at times during his first four years, and he’s only 24 years old. If they want to go the franchise tag route, it was $9.6 million for the current season. Rashaad Penny and Cordarrelle Patterson signed for less than $6 million (annually) after good seasons last year; Jacobs is worth more than them. And if Jacobs winds up playing for another team, I’m sure the Raiders would add another back who would be expected to begin the 2023 season ahead of White on the depth chart. Things can change quickly at the running back position, of course. Maybe White gets a couple of late-season starts and runs for 100-plus in both of them. But to me, I think it’s safe to pencil in White for a backup role heading into next year.

Do you have a list (or know where a list is) of the players the NFL considers multi-position players (i.e. Deebo Samuel wr/rb ). My league is on CBS Sports. The site has the ability for the commissioner to manually enable the option. However, for some odd reason they are unable to provide us the list! We have to ask the commissioner to look up the player to find out, as he is the only person who can see it.

For positions, best (I think) to rely on how the teams list them. That is, Taysom Hill arguably could be listed a number of different ways, but the Saints call him a tight end – so he’s a tight end (if we’re using the rule of going by the team’s listing). Cordarrelle Patterson has been a wide receiver for most of his career, but for the last two years the Falcons have listed him as a running back – so he’s a running back. All 32 teams have their own website, where they’re roster is presented and maintained. When you have a question about a player, you go to the site and look him up. In the case of Deebo Samuel, he’s listed as a wide receiver.

Slight wrinkle to consider here: If a team changes a player’s position, does the position also change in your fantasy league? That is, Taysom Hill is currently listed as a tight end. If the Saints next week decide Hill will be their starting quarterback and change him to a quarterback on their roster, would Hill still be able to line up as a tight end in your fantasy league? The way our league is set up, Hill would no longer be eligible to line up at tight end, but I think the majority of fantasy leagues would have players locked in.

Justin Fields has had two amazing weeks in a row yet he is still listed outside of your top 10 QB. In your opinion we’re those fluke games? Or is his strength of schedule something that is of concern for you? Would you trade him while his numbers look good or make him your QB1 for the rest of the season?

To me, he looks a lot like Jalen Hurts from last year, or rookie-season Lamar Jackson. Fields isn’t there yet as a passer. Not even close. He can’t operate as a pocket passer. He’s not good enough yet at recognizing what’s happening with coverages and pass rushes. He’s thrown for more 190 yards only once, with plenty of missed throws and unnecessary sacks.

But Fields sure can run. He’s run for at least 47 yards in seven straight games, and they’ve cranked it up further since the mini-bye following the Washington game. He’s run for 88, 82, 60 and 178 yards in his last four, with 3 TDs.

My general lean would be to just stick with him and hope to ride the hot hand. The next two are against Detroit and Atlanta, and he’s certainly a good contender for top-5 quarterback numbers in those games. The Falcons rank last in pass defense, while the Lions have allowed the most points in the league. The four following games don’t look at promising – Jets, Packers, Eagles, Bills.

What have you heard about the Buccaneers long-term plans? They're a fringe playoff team, at best, this season, that will probably get eliminated early in the playoffs. Then, it seems likely Brady will retire and they'll move on from Fournette. That still leaves a pretty talented roster to fill out, so they must have started some sort of succession plan post-Brady.

Brady probably will retire, but it’s not certain. If he decides to come back for one more season, it won’t necessarily be with the Bucs. He’ll be a free agent in March, and there could be other teams that he felt would give him a better chance of making it to another Super Bowl. The 49ers, for one, have a great defense and a bunch of weapons – and his parents live in that area.

As for the Bucs, I think it will be reboot. They drafted Kyle Trask in the second round a year ago, but he hasn’t done anything to suggest he’s ready to be a starter – he’s not even their backup quarterback yet. I expect they’ll be bringing in somebody new, probably by trade or free agency. I wouldn’t think Leonard Fournette would be part of their long-range plans. He’s 27, and I think they’re ready to transition to Rachaad White. But the contract info posted at Spotrac indicates it’s more likely the Bucs will release him after the 2023 season.

In a TD-only league with one generation of top QBs showing a significant decline (Brady, Wilson, Rodgers, etc ) which 1st- and 2nd-year QBs do you see continuing to take their place as Mahomes, Allen and Burrow have already done so in the next year or so?

Trevor Lawrence is on his way to being a good quarterback. But with him being halfway through his second year, I’m losing confidence that he’s going to make it up to the great level. Maybe he’s more of a Carr or Cousins-type quarterback, rather than one of the greats. As well as Justin Fields has played recently, I think it can be debated whether he might have a more impactful career, certainly for fantasy purposes. The three pocket passer quarterbacks from that draft class – Zach Wilson, Mac Jones and Davis Mills – it doesn’t look like they’re going to develop into anything other than (maybe) average quarterbacks.

Trey Lance and Malik Willis are blank slates. With their running ability, both have the ability to maybe develop into Jalen Hurts-type quarterbacks. But they haven’t done anything yet that indicates that will happen. I’m not confident the 49ers will move into next year operating under the assumption Lance will be their starter. With Willis, he’s got a long way to go as a passer.

With Kenny Pickett, he’s only four starts in his career. The results thus far have been modest, but it’s early. He’s got a nice trio of pass catchers, but they need to address the offensive line. We’ll see.