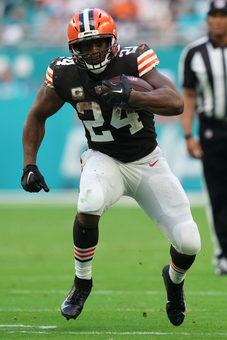 With the weatherman calling for 30 inches of snow in Buffalo, what is your feeling about starting quarterbacks or any offensive players?

There is a chance the game gets moved to Detroit. If they’re playing inside on the fast track, it will be bombs away for Buffalo’s offense. But assuming it’s outdoors in the slow, I would think it becomes more of a slog, with less passing. The USA Today printed a list of prominent snow games today. There have been six in the last 20 years. In only one of those games did a quarterback pass for 230-plus yards (Tom Brady, going for 380 yards and 6 TDs in a 59-0 blowout over Tennessee). Only two other quarterbacks reached even 200 passing yards, and only 3 of the 12 threw multiple touchdowns.

Running, on the other hand, I think can be enhanced in lesser weather conditions. And that’s supported by the numbers. In these six games, there were eight different running backs who ran for over 120 yards. That’s a remarkable total, and there were three who went over 200 yards. If I’m holding Nick Chubb, I’m quietly hoping for the snow to continue to fall on Sunday during the game. He’s a real good back anyway, looking like might go for 150-plus yards. With the Bills, it’s a little different, with Devin Singletary being a smaller, elusive back. Josh Allen might be their leading rusher (and with his playing style, he’s perhaps the rare quarterback whose numbers might still be good in poor weather). In the six games, I see 12 running backs with at least 10 fantasy points (using PPR scoring).

Given the conditions, I’d be worried about the pass catchers. I would be looking at the weather just before kickoff, seeing if snow would be falling during the game and if the field was cleared. I’d want to look at the wind. The forecast right now calls for 20-plus mph winds. My expectation is that I’ll be trying to avoid using pass catchers in that game. But we’ll see. In the last six snow games, I see only 14 pass catchers reaching 10 fantasy points (that includes one tight end).

I have Justin Herbert. Keenan Allen is on the free agency list. Your thoughts about taking him? As the Chargers get healthy, do you think he could be a force in the final few weeks and playoffs? 10 plus weeks off due to a hamstring is a concern.

Definitely should be rostered, in my opinion. He’s the guy there that Herbert has trust working with. Mike Williams has more ability to jump over defenders, making a spectacular catch, but Allen is more reliable and crafty – the guy Herbert prefers to go to in clutch situations. And not just between the 20s but also around the goal line. You would think, with Williams being 6-foot-4, that he would be their guy around the goal line, but those throws are tough to pull off. I’ve got the numbers from the last two years in front of me. Williams inside the 10: 19 pass attempts result in 5 catches, including 3 touchdowns and a 2-point conversion. Allen inside the 10: 21 attempts result in 13 catches, with 9 TDs and a 2-pointer. Allen in the last two years averaged 7 catches for 71 yards in his 30 games, with 14 TDs.

It all comes down to the hamstring, of course. He hasn’t been right physically since the first quarter of the opener. He came back once and aggravated it. Now he’s attempting to get back on the field – was a limited participant at practice on Wednesday. If the hammy holds up, I expect you’ll see him putting up his usual kind of numbers for the duration.

What are your thoughts on the Lions' usage of D’Andre Swift? Trying to manage this situation is more than a little frustrating (and having Jamaal Williams too doesn't really help).

Under the right clinical conditions, Swift can be another Alvin Kamara. We’ve seen that on the field. He had 50-yard runs in both of their first two games. Last year, he ran for 130-plus yards in back-to-back games against the Steelers and Browns. He can do it.

But as we move into the second half of his third season, it seems like Swift has a sportscar body type. Ask him to carry a heavy workload, and he doesn’t seem to stay healthy for long. He’s been hurt every year. I think the Lions may now be revising how they use him. In each of the last three weeks, Jamaal Williams has been what you would call their starting back, with Swift moved down into more of a change-of-pace role. Dan Campbell said something about wanting to use him more when he’s fully healthy (Swift continues to miss some practice time with shoulder and ankle injuries) but I don’t think we’re going to get back to where Swift is playing in a full-time type role. He had a 33-carry game against the Steelers last year, and he’s just not built to do that. Maybe Swift gets back to where he’s handling about half of their carries (perhaps a few more in key games), but I think that’s just what he is.

Swift’s contract runs through next year. It will be interesting to see what kind of deal he signs, particularly if he plays plays in the second half of the 2023 season.

10-team PPR league with three keepers kept annually. My team has already made the playoffs with a 9-1 record thanks to having both Cooper Kupp and JaMarr Chase. With Kupp now out for surgery, I could move him to a team (keeper league) who's out of the playoff picture and try to get a comparable (but lower quality) WR to fill in. I'd hate to lose Kupp in a keeper league - but I'm also running low on stud WRs with Aiyuk, Kirk, Slayton and Godwin holding down the fort until Chase comes back. Would you deal Kupp in a keeper league to make a championship run? I could snag Amon-Ra St. Brown and maybe upgrade my DST as an option for Kupp.

I’m not sure if St. Brown and a defense would quite get it done, but maybe. I’d be thinking hard about it. Kupp will be 30 on opening day next year, and that’s now a rebuild. The Rams have all kinds of cap issues and don’t have any draft picks. Sean McVay might be ready to pull a Sean Payton, stepping off a sinking ship.

We can look at Strength of Schedule. If we plug in the current numbers to the next four games for each team (Weeks 11-14 for most teams, but Weeks 11-15 for teams that haven’t yet had their byes), they indicate that the Chargers and Bills will face the softest defenses in the next few weeks – they’ll play the defenses that have been allowing the most touchdowns.

Kansas City and Philadelphia are probably the favorites to meet in the Super Bowl, but those teams will tend to face the toughest defenses. All things being equal, their next four games are against opponents that should allow about 3 fewer touchdowns (than what the Chargers and Bills are seeing). Not that anybody should be looking to dump their KC and Eagles players. Just saying. Other notable offenses with softer upcoming schedules: Bengals, 49ers, Vikings. Other notable offenses with harder short-term schedules: Cardinals, Browns, Lions, Cowboys, Bucs.

In a standard td league with 5 bonus pts every 25 combined rush/rec yds starting at 50 yds. Need a flex from Swift, M.Carter, L.Murray, Jeudy, Palmer, or R.Moore. Also Pitts or Hurst? Was late to ask last week, hopefully I got this in early enough.

I will go Hurst over Pitts. With JaMarr Chase sidelined, I think Hurst will see more passes sent his way. For the others, I’d be mulling between Swift and Carter. I’ve got Swift slightly higher via my projections.