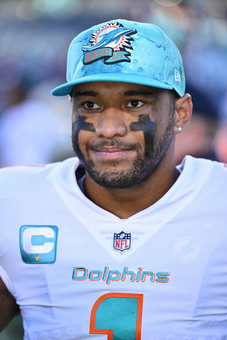 Tagovailoa, Fields push their up way into the top 10

At what point do we decide that quarterbacks like Tua Tagovailoa and Justin Fields have fully arrived? If not as legit quarterbacks, at least as legit fantasy options? Both are producing well right now, but both have a little limited body of work.

In general, I’m ready to take the dive with these guys. With Tagovailoa, I like what they’ve got going in Miami. It may be more about the design of the offense and the surrounding personnel, with those two speedy receivers, but he’s been productive. He’s getting the ball out of his hands quickly on short, accurate throws, consistently throwing for a lot of yards.

I do see three flaws that prevent me from ranking him any higher. He’s not a runner (making it tougher for him to put up big overall numbers). He’s got a limited arm, making it harder for him to connect on the big throws downfield. And I don’t know how long he can stay healthy, with him being a smaller guy and having had a lot of injuries already.

Tagovailoa is only 24, but I don’t have a lot of confidence that he has more career left than 29-year-old Dak Prescott or even 34-year-old Kirk Cousins.

With Fields, he hasn’t shown yet that he can do it as a passer. He’s thrown for more than 190 yards only once this season. But he’s been a huge factor as a runner, with at least 47 yards in seven straight games. He’s scored touchdowns on his own in three straight games. With that running ability, I’m thinking he might develop into another Jalen Hurts. And if Fields is going to run his way to top-5 numbers in 2023, I’ll take that and worry about the rest of his career later.

I’ve got both Tagovailoa and Fields among my top-10 quarterbacks. Not for this year, but for dynasty purposes. Below see my top 50 at the position. On this list, I’m assuming standard scoring, and with teams being able to hold the rights to players indefinitely. In my head, I’m thinking about a 12-team league, with each holding about three quarterbacks. So guys in the 40s, they’re not even rosters. And in the late 20s and early 30s, I think it makes sense to see some teams taking flyers on quarterbacks who might develop into something in 2023 or 2024 – Zach Wilson, Jordan Love, Malik Willis, Desmond Ridder.

I found the old guys – Aaron Rodgers, Tom Brady – hard to grade. With both, it’s not certain they’re even playing in 2023. With them also not playing all that well right now, I have them slotted conservatively. I’ve got them both ranked behind Trey Lance (I’m not confident Lance will ever develop into anything, but there’s a chance he’ll become a Hurts-type double-threat quarterback).

I turn my attention to dynasty leagues every Saturday, rotating between the four notable positions. To see previous installments, use the “past issues” navigation box.

In the chart below, rookies tagged with black dots.