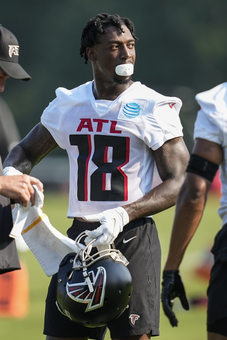 In trade deadline sparked more deals than ever before, and the trades were particularly interesting at the wide receiver position. Three different teams traded picks for wide receivers who might be their most productive receivers next year.

Calvin Ridley for sure. He’s shown he can do it. He caught 90 passes for 1,374 yards and 9 TDs in the 2020 season, and he caught 16 touchdowns in his first two seasons. He stepped away from the game during 2021 to address his own mental health and is now suspended for all of the current season for placing a bet on a game. He didn’t see the memo, apparently, that players aren’t allowed to wager on NFL games.

If Ridley shows up ready to play something like he did in 2020, he’ll probably be Jacksonville’s best receiver next year. It can be debated whether he’s better than Christian Kirk.

Similarly in Chicago, the Bears have Darnell Mooney, who’s been pretty good. But Chase Claypool might be better. Claypool is big and talented; it’s just a matter of getting him dialed in and pointed in the right direction. He’ll be eligible for a contract extension in the offseason, but I don’t know that the Bears will want to give him one just yet. They may prefer to see him play for a year in their offense first. Wide receivers like Terry McLaurin, DK Metcalf, Diontae Johnson, A.J. Brown and Deebo Samuel signed huge extensions prior to this year, but all of those guys were more productive than Claypool in their first three seasons.

And finally, there’s Kadarius Toney. He seemed to butt heads with the coaching staff in New York. Not sure if he didn’t like the coaching coach or the offense, or if they didn’t like him. He didn’t practice his final three months there. But Toney’s in Kansas City now, and everybody seems to be getting along. He’s practicing, and they say they’ve been very impressed with him.

Kansas City doesn’t have much talent at wide receiver. Maybe their second-round pick, Skyy Moore, pans out, but he hasn’t done anything yet. JuJu Smith-Schuster, Mecole Hardman and Marquez Valdes-Scantling are all contributors, but none are certain to be on the roster next year. While largely unproven, Toney is a better athlete than all of those guys, with a chance to be the most productive wide receiver in one of the league’s better offenses next year.

If you’re in a dynasty league, all three of these receivers – Ridley, Claypool, Toney – are guys to be thinking about for 2023 and beyond.

I turn my attention to dynasty leagues each Saturday, rotating between the four notable positions. My stab at wide receivers appears below. These rankings are done by hand (unlike our in-season rankings, which are numerically driven). I’m assuming a 12-team league using PPR scoring, with teams retaining player rights indefinitely. I’ve got rookies tagged with black dots.

To see previous rankings at other positions, use the “past issues” navigation box.