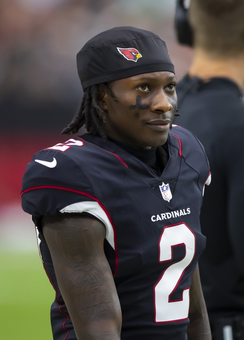 Ian Allan answers your fantasy football questions. In this edition: Can Odell Beckham make a difference in December? Top players coming back from IR. And weighing Amon-Ra St. Brown vs. Najee Harris.

Where would OBJ land on your WR rest-of-season (redrafter) rankings?

I think he’s going to sign with Dallas. I don’t think he’ll make a big impact there. I think the intention will be for him to contribute a few key catches late in the season, then maybe help in the postseason. He’s not going to be as productive as CeeDee Lamb or Dalton Schultz. I don’t think he’ll as productive as Michael Gallup either. If we want to be optimistic, maybe you would rank Beckham among your top 60 wide receivers for the duration. But for myself, I see other guys in that range that I would rather have on my roster – Demarcus Robinson, DeVante Parker, Mack Hollins, Marvin Jones.

What players currently on IR would be good to stow away on my roster to use for Weeks 12-14?

I don’t know that there’s an IR player who’ll be a difference maker for your team, but we can kick around the possibilities. My top 10 players who are current on Injured Reserve …


1. Hollywood Brown, Cardinals. He might be activated this week and definitely will be in the starting lineup when they return from their Week 13 bye. He’ll be their best non-Hopkins receiver the rest of the way. Averaged 7 catches for 81 yards in the first six weeks of the season, with 3 TDs.
2. Darren Waller, Raiders. He’s eligible to come back in Week 14, and I imagine he will. He’s been a franchise-type tight end in the past, but I don’t think he’ll be getting back to those kind of numbers this year. He caught 6 passes for 46 yards in his final two full games before his hamstring injury.
3. Dallas Goedert, Eagles. Eligible to return from a shoulder injury in Week 15. I haven’t heard anything about a timeline; I’m sure they’d love to have him for that Week 16 game in Dallas. Goedert has averaged 60 yards in nine games, with 3 TDs.
4. Mecole Hardman, Kansas City. Eligible to return from an abdominal injury in Week 15. I haven’t heard anything about whether that will occur. Kansas City has plenty of other receiving options, so I don’t imagine he’ll be stepping back into a heavy-duty role. But Hardman was coming on before his injury, with 17 catches for 226 yards and 3 TDs in his last four games, plus another 2 TDs on runs. KC has Kadarius Toney now, and it looks like he might be as good (or better) on the end-around runs.
5. Jameson Williams, Lions. I don’t expect Williams will be much of a factor, but if you pick through stuff I wrote a month ago, you’ll find similar comments about Kadarius Toney. Williams is practicing, he’ll get on the field before long, and he’s talking about how excited he is to rip things up. In a large league with ample rosters, makes some sense to park him on the end of your bench, seeing what we looks like.
6. J.K. Dobbins, Ravens. He’s eligible to return, but it doesn’t look like it’s happening this week. He’s not practicing today. When he returns, I imagine he’ll be worked into their rotation of backs. I don’t envision Dobbins at any point in the 2022 season being as productive as Gus Edwards. With more size and power, Edwards has more ability to bang inside, and I think the offense is more effective when he’s in there. If you stash Dobbins, it would be with the hope he’d come back and be a contributor.
7. Mike Boone, Broncos. He’s eligible to come off IR for Week 13. Broncos have been passing a lot to their running backs, and I think he’s a better pass catcher than Latavius Murray or Marlon Mack.
8. Khalil Herbert, Bears. Eligible to return from a hip injury in Week 16. When he was playing, he was more effective – more potent – than David Montgomery. But I’m not sure he’ll make it back at all, and that whole running game looks fishy now, with Justin Fields having a bad shoulder.
9. Joshua Kelley, Chargers. He’s eligible to return from IR, but it doesn’t look like it’s happening this week (he hasn’t yet been designated to return). When he got hurt, he was their No. 2 back behind Austin Ekeler.
10. Chris Boswell, Steelers. Eligible to return from a groin injury in Week 14. I don’t think he’ll be graded as a top-10 kicker in any of the remaining games of this season.

I have an owner who wants to give me Najee Harris for Amon-Ra St. Brown. Would you make the trade? Standard league. Any insight on Najee Harris status?

I like St. Brown in PPR, where he’s plunking out 7-plus catches week after week. In standard scoring, I will take Harris. He’s been a disappointment this year, averaging 55 rushing and 14 receiving yards, with 5 TDs. But the Steelers have been running it better recently, with 144, 217 and 102 rushing yards in their last three. Harris ran for 99 yards against the Saints, and he ran for 90 and 2 TDs against the Bengals, with that cool play where he hurdled the defender at the goal line – his best play of the 2022 season. Jaylen Warren suffered a hamstring injury in the Cincinnati game, so I think we’ll see Harris in more of a full-time role for the near future.