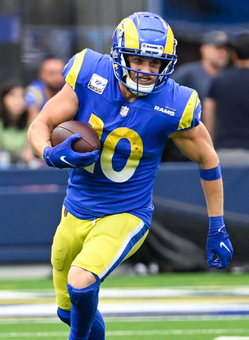 What do we make of Cooper Kupp? When he next steps on the field, he’ll be 30, and possibly playing in a new offense. How many top-10 seasons (if any) does he have left?

The upside was demonstrated in 2021, with 178 catches for 2,425 yards and 22 TDs in 21 games. And his numbers, remarkably, didn’t decline in the second half of that season (even with defenses going into games knowing that he was getting the ball). When he’s healthy and they’ve got things clicking, he’s seemingly impossible to stop.

But the team around Kupp could be dramatically different when he returns in 2023. Is Sean McVay coming back? With the Rams looking like a rebuilding project with limited cap space and dollars to work with, McVay could look to go the Sean Payton route, stepping away to either move into TV or wait for a better situation. And is Matthew Stafford playing? Probably, but I don’t think it’s a given.

So while there’s a chance Kupp will put up top-5 receiving numbers in 2023, I would be more leery of selecting him too early in a dynasty draft. There are a bunch of younger receivers who’ve got a lot more career left in front of them.

There are four rookie receivers, I think, who have shown enough that I would select them before Kupp in a dynasty format. Garrett Wilson, Chris Olave, Christian Watson and George Pickens all look like they’re going to be good receivers, and they’re all at least 6 years younger.

There are another four rookie receivers I would consider putting ahead of Kupp: Jameson Williams, Jahan Dotson, Drake London and Treylon Burks. (I’ve got Kupp ahead of them on my board, but I think I could be talked out of it.)

Dynasty rankings are notoriously difficult, with the balancing of what players are right now and might they might be two years from now. On my board, I have discounted the wide receivers who are around 30 years old – Davante Adams, DeAndre Hopkins, Keenan Allen and Mike Evans. It’s tough.

I turn my attention to the dynasty rankings each Saturday, rotating between the four notable positions. For the most-recent rankings at the other positions, use the “past issues” navigation box.

Rankings assume a 12-team team, with owners drafting about 7 receivers each and holding the rights to players indefinitely. (So older players tend to get downgraded.) I’m using PPR scoring, and in the chart below, rookies are tagged with black dots.