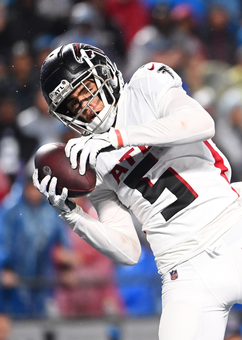 Falcons starting to use Drake London

After the last three weeks, I think we can add Drake London to the party. He looks like he’s going to be a good receiver for a lot of years.

London, recall, was the first receiver chosen back in April, going 8th overall. But he has been underused for the bulk of the season. For a good stretch of the season, the Falcons were getting better production out of Olamide Zaccheaus. Other rookie receivers have been more impressive, including Chris Olave, Christian Watson, Garrett Wilson and George Pickens.

But Atlanta is using London now, and he’s responding. Three weeks in a row he’s caught 6-7 passes for 70-96 yards, which is particularly notable with the Falcons not passing all that much. Over the last three weeks, he’s accounted for over half of their receiving production (259 yards, versus only 223 for the rest of the team combined).

London is large (6-5, 210), and he’s shown the ability to make contested catches – boxing out defenders and pulling down high throws. I don’t think anyone in Atlanta is regretting picking him in the top 10. As that team gets better, with an improved passing offense, he’ll put up big numbers.

If I were walking into a dynasty draft today, I would consider drafting London ahead of guys like DeAndre Hopkins, Amari Cooper and Terry McLaurin. Those guys are all currently better than London, but they’re also a lot older. He’s only 21.

We’ll see how things transpire in Atlanta in the offense. Who’s quarterbacking there? And when are they going to start passing the ball more? But I would think London might finish the 2023 season with top-20 numbers, and better years should be coming.

Below is my list of the top 80 receivers for dynasty purposes. This would be a league where teams hold the rights to players indefinitely. I’m skewing towards younger players, with receivers who’ll be 29-plus years old next year outside the top 10, including Stefon Diggs, Tyreek Hill, Davante Adams, Cooper Kupp and DeAndre Hopkins. Those guys are great right now, but I’m trying to play the long game.

I turn my attention to dynasty leagues every Saturday during the regular season, rotating between the four notable positions. To see the most current lists at other positions, using the “past issues” navigation box.