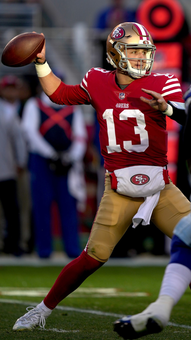 49ers should try to work the run

Fantasy Index Weekly is done for the season, but we'll preview the final three games here at the website anyway. Up first is the NFC Championship game, with San Francisco traveling to Philadelphia. I'll look at the 49ers today, the other three teams over the next couple of days, and rank all the players from the teams by the end of the week.

These teams have met just twice in the last five years, with the Eagles winning 25-20 at San Francisco in 2020 and the 49ers winning 17-11 at Philadelphia early in the 2021 season. The higher-scoring game was with Carson Wentz and a Nick Mullens-C.J. Beathard combo at quarterback, while the more recent game was with Jimmy Garoppolo and Jalen Hurts each passing for under 200 yards in a run- and defense-oriented encounter. One previous playoff meeting (San Francisco won 14-0 back in 1996).

The Eagles are favored by 2.5 points, with an over-under of 45.5. (The AFC game has a narrower spread, just 1 or 1.5 points, and a slightly higher over-under of 47.5.) Not a heavy favorite in either matchup. … The early forecast indicates weather won't be a factor. Temperatures should be around 50 degrees, with just a 6 percent chance of rain and winds around 8 mph.

San Francisco had a top-6 offense (both yards and scoring) during the season, averaging 366 yards and nearly 27 points per game, but they'll probably come in underneath those levels here. The Eagles had one of the league's best defenses during the season; only the 49ers themselves allowed fewer yards per game (301) and only seven teams allowed fewer points (just over 20 per game). Philadelphia seemed to slip some down the stretch -- notably engaging in a pair of shootouts with the Packers and Cowboys -- but injuries were a factor. They were without safety Chauncey Gardner-Johnson for a stretch of games, but he's healthy now. San Francisco's offense piled up huge numbers for most of the season, but a lot of the biggest performances came against defenses well below this one. Difficulty goes up a notch in the playoffs, as seen by the offense managing only 19 points against Dallas while the Eagles allowed only 7 to the Giants. San Francisco averaged almost exactly 3 TDs per game during the season, but that looks more like their ceiling here. It looks like a 24-21 type of game that could go either way, with the 49ers scoring 2-3 TDs -- just 2 about as likely as making it up to 3.

Christian McCaffrey is dealing with a calf injury that affected him (and cost him some playing time) against Dallas. He played about two-thirds of the snaps but managed a modest 57 total yards (10 for 35 as a runner, with a touchdown, and 6 for 22 as a receiver). Dallas bottled him up pretty well for most of the game, while Elijah Mitchell (14 carries for 51 yards) had nearly as many chances, including all 4 carries on the final drive when San Francisco was trying to kill the clock. McCaffrey admitted afterward he was "fighting but made it through," but said that he'll be fine for Sunday. He'll probably be limited in practice this week, and it might result in more of a one-two punch backfield with Mitchell than it might otherwise.

That's assuming Mitchell plays, of course. He picked up a groin injury at some point last week and is considered day to day. Mitchell had a big 13-yard run for a first down against Dallas, but he also accidentally went out of bounds (or Dallas wouldn't even have got the ball back). He hasn't been great in the two playoff games (23 carries, 53 yards), but he'll probably get around a quarter or a third of the carries (more if McCaffrey breaks down). McCaffrey should get nearly all the chances in the passing game (the starter averages nearly 5 catches per game; Mitchell has caught 5 total in his seven contests). The ground game is definitely San Francisco's best chance to have some success in this matchup. The Eagles ranked just 17th in run defense during the season, allowing 122 yards per game and 15 touchdowns (average). Poor as New York's offense was last week, it ran for 118 yards and a score while averaging 5.9 per attempt. And San Francisco has long had one of the best rushing offenses, 8th during the season at 139 yards per game, with 20 touchdowns. (Most of the teams ahead of them had significant contributions from their quarterback.) If San Francisco wins this game, little doubt it will be with those running backs leading the way. If Mitchell can't suit up, Jordan Mason would be worked in as that second back, and there wouldn't necessarily be any dropoff. Those in deeper playoff leagues counting on Mitchell might want to add Mason, if possible.

Brock Purdy has been better than even San Francisco could possibly have hoped for; most notably, his next loss will be his first (8-0 since replacing Jimmy Garoppolo, if you include the game the starter was knocked out of early). But best to ratchet down expectations this week. Here, he's on the road against one of the league's very best pass defenses. Philadelphia ranked 4th during the season, allowing just 209 yards per game, with 22 touchdown passes. While three of Purdy's games came against defenses ranked 25th or lower versus the pass (Arizona, Las Vegas, Miami) and two against Seattle (who also wasn't good, they were just worse against the run), he played three games against top-10 pass defenses, and put up modest numbers in all of them.

While Purdy won all three games, and threw 2 TDs in two of them, he finished with below-average yards, and averaged just 24 attempts (his three games with 30-plus were against lesser defenses). Purdy has thrown only 3 interceptions in his games, but was fortunate to have a pair of opportunities dropped by Dallas. This defense is better than any of those previous groups, and they're not going to have Purdy leading the way -- nor would they have with Garoppolo. They'll emphasize the run and have Purdy throwing no more than necessary, looking to eke out a lower-scoring win. If San Francisco falls behind and Purdy is forced to throw more, good chance the game isn't going how the 49ers would like. Purdy has run for 2 touchdowns, but that's not really a part of his game (34 rushing yards in 8 contests).

Passing numbers should be down, but Deebo Samuel looks OK anyway. They'll throw him some quick passes near the line of scrimmage, and he'll also run it some (7 for 43 in the two playoff games). During the season he averaged just 49 receiving yards but also 18 rushing yards, with 5 touchdowns. When San Francisco won at Philadelphia during the 2021 season, Samuel caught 6 passes for 93 yards. Tough matchup, but of the 22 touchdowns this defense allowed, 16 went to wide receivers; just six teams allowed more. Brandon Aiyuk is the other player at the position to consider, but he's been less of a factor with Purdy at quarterback. His two games with even 60 receiving yards in those eight were with Samuel sidelined. In the five with Samuel on the field he's caught 16 passes for 261 yards, with 1 touchdown. Jauan Jennings isn't much a factor as the No. 3 (one game with more than 2 receptions in his last eight) but had a big catch against Dallas.

The Eagles allowed only 3 touchdowns to tight ends during the season, none in their last eight games. They didn't face many players comparable to George Kittle, however, who's been really good -- especially since Purdy took over. In their eight games together Kittle averages 4 catches for 56 yards, with 7 touchdowns. Passing production should be down this week, and note also that Kittle finished under 40 yards in five of those eight contests. But he'll probably be one of the primary targets, including in the red zone.

Robbie Gould has been pretty awesome this season, and very productive of late. He averaged nearly 8 points during the season, and has followed it up with 15- and 13-point playoff games -- 4 field goals in each game. He's kicked 19 three-pointers in the eight Purdy games, plus 28 extra points. That's 10.6 points per week. The matchup is poor (the Eagles allowed under 6 points per game to kickers), but two of the other three teams still playing (49ers, Kansas City) also allowed under 6.5 points to the position, and Gould has been more productive, especially lately, than the kickers in those matchups.

The 49ers Defense has three more takeaways (30) than any of the other teams still playing, though only the Bengals have fewer sacks (44). But still an above-average pass rush during the season, facing a quarterback who will take some (38 in his 15 full games). Hurts has thrown only 6 interceptions, with only 2 lost fumbles. San Francisco had 3 defensive touchdowns during the season, same as the Eagles allowed (a better situation for one of those scores than the AFC game). Ray-Ray McCloud has never scored on a kick return, but had a 53-yarder against Dallas last week.