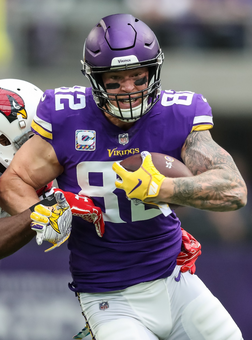 Rudolph on the move

Kyle Rudolph is on the trading block, and it looks like he’ll be moved sooner rather than later. The Vikings probably would like to get something for him before his contract expires at the end of the season, and they’re also squeeze up against the salary cap. Moving Rudolph would get them a little wiggle room.

“I've had conversations with Kyle and quite honestly I really love all my players,” Mike Zimmer said at a charity golf tournament (per local beat writer Chris Tomasson). “We expect Kyle to be here but sometimes business gets in the way.”

If the Vikings trade Rudolph, they’ll be left with some combination of Irv Smith, David Morgan and Tyler Conklin at tight end. Smith has the most long-term potential, but it’s rare for tight ends to thrive as rookies. I wouldn’t expect big numbers from Smith in 2019, though I will concede that that Kirk Cousins has been effective getting the ball to tight ends on shorter routes. In the 2015-2017 seasons, Jordan Reed caught 76 percent of the passes thrown his way – best among tight ends. Rudolph last year caught 78 percent of the balls thrown his way – 2nd among tight ends.

I’m not sure where Rudolph is headed. There might not be a lot of interest in him. Five possibilities:

JACKSONVILLE
The Jaguars have John DeFilippo as their offensive coordinator. He was the OC in Minnesota last year. And they don’t have much else at tight end – Geoff Swaim, James O’Shaughnessy and third-rounder Josh Oliver. Probably the favorite. And

OAKLAND
They don’t really have a tight end. Luke Willson, Derek Carrier and fourth-rounder Foster Moreau. Jon Gruden said something a few weeks back about hoping Darren Waller will become a big-time tight end for them, but that doesn’t look realistic.

NEW YORK GIANTS
Like DeFilippo, Pat Shurmur previously was an offensive coordinator in Minnesota. They potentially could add Rudolph, using him as an in-line tight end, giving them the flexibility to use Evan Engram more like a wide receiver. At 6-foot-3 and 240 pounds, Engram isn’t really big enough to line up as a traditional tight end. But New York has another former Vike, Rhett Ellison, to serve as that blocking tight end. Not sure they’re looking to upgrade in that area.

NEW ENGLAND
The Patriots have a bunch of older and lesser guys at the position, including Benjamin Watson, Austin Seferian-Jenkins, Matt LaCosse, Ryan Izzo and Stephen Anderson. So maybe. But I’m figuring they’re interested only if the price is right.

NEW ORLEANS
He’s not going to the Saints, but it would be sort of cool if he did. Kyle Rudolph played his college ball at Notre Dame. Irv Smith Sr. also played at Notre Dame and was a first-round pick by New Orleans in the ‘90s. Irv Smith’s son played at Alabama and was recently chosen in the second round by the Vikings. Smith Jr. bounces Rudolph out of Minnesota, so Rudolph goes to New Orleans and completes the circle.

Wherever Rudolph goes, I imagine he’ll be a big part of the offense around the goal line. He’s been good in that part of the field. Not so much last year. Inside the 10 in 2018, Rudolph caught only 2 of the 10 passes thrown his way. But in the previous three seasons, he caught 17 of 30 passes in that area.

Over the last four years, only three players have seen more targets inside the 10-yard line. That’s if you count 2-point conversions as plays.