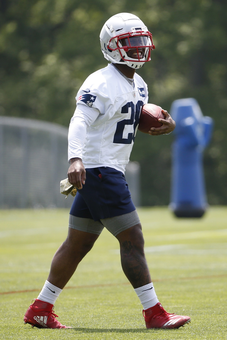 Building a contender on a budget in an auction league

Can you walk out of a draft without a top-10 running back, a top-10 wide receiver or any of the three elite tight ends and still have a contender? I sure hope so.

That’s how it played out for me in the Fanex Auction league this year. I didn’t intend to skip out on all of the elite talent at the premium positions, but that’s how the auction unfolded. I subscribe to the theory that you put together a price list and then take whatever players the free market happens to send your way. Your team is dictated in large part by what the other owners do, and they overspending (I thought) on the superstar talent.

At wide receiver, I didn’t see any great deals in the top 14. I thought about making a late bid on Michael Thomas. I thought he was worth $40, and he went for $35. So had I bid $36, I might have gotten him for 10 percent less than his retail value. But at that point, so much money had been spent that I figured I would be better off saving my money for the many deals that were sure to come along in the middle of the auction.

I ended up with six receivers ranked between 15th and 28th on my board – Chris Godwin, DJ Moore, Cooper Kupp, Tyler Lockett, Dede Westbrook and Robby Anderson. I spent $87 on those guys (out of my $200 cap), and I had them as “worth” $126. So that’s outstanding.

With my last pick, I added another wide receiver with top-40 potential: Geronimo Allison. I think he’s worth $10, but he went for only $2 (the other owners in this league are higher on the other Packers receivers, Marquez Valdes-Scantling, who went for $8).

By the way, this is PPR scoring. And you can start four wide receivers each week. You must start three, and you can start a fourth in your flex spot. So while there’s no JuJu-Julio type guy here, this is a nice group to work with in this kind of league. Even with injuries and byes, I’ll always be positioned to start good players in the flex.

It went the same way with the running backs. I didn’t buy any of the top 11. There were two that I was thinking about: Melvin Gordon and Todd Gurley both went for $27, and I had them as worth $34 and $33. So those were pretty good deals, but I didn’t want to take on the risk of Gurley’s knee. The Gordon holdout didn’t bother me as much, but I got a little gunshy.

The running back position worked out fine, however, because nobody else valued the two elite pass-catching backs the way I did. I got James White and Tarik Cohen for $12 each, and I thought they were worth over twice as much. They combined for 158 catches last year, making them very solid in a PPR format – I think they’ll outscore the leading rushers on their teams. Toss in Derrick Henry, and I got three of the next four running backs after the top 11.

Later in the draft, I was worried I might get caught holding money and figured I’d better buy the last of the big running backs who was left. I’m not a big Josh Jacobs fan (I thought he was worth only $20) but I decided to pay $22 for him to avoid possibly getting stuck with a major misplay. This is a slow-crawl auction, so there’s plenty of time to think carefully about each bid.

Toss in Matt Breida ($5) and I spent $71 on five running backs that are valued at $111. That’s very good, I think. I’ll always have two starters, and sometimes I’ll be able to use a third in the flex spot. With those five, I think I’ll be able to handle injuries and the possibility that somebody simply isn’t very good.

At quarterback, I’ve got a solid trio, and they went for pennies on the dollars – Matt Ryan, Drew Brees and Ben Roethlisberger for a combined $22. They’re all top-11 quarterbacks on my board, and I thought they were worth a combined $50. Lots of good deals for everyone at this position. I didn’t intend to buy Brees; I put him up at $5 early figuring I’d like to see somebody else grab him. But he’ll be fine. I added a third quarterback (Roethlisberger) late because I didn’t want to see somebody get him for a deal, and my other two both have Week 9 byes. Had I not made that bye, I probably would have had enough money to purchase Curtis Samuel or Keke Coutee as my final receiver, rather than Allison.

At tight end, I was mulling Travis Kelce early. I though he was underpriced at $31. But I ended up with my two favorite buys of the top-10 guys: Austin Hooper and Kyle Rudolph for a combined $7 (out of $200).

Very little interest in defenses in this league. I tossed out Minnesota for $1 early and there was no action. The No. 2 defense on my board (Chargers) went for only $1, so that would have been the correct move.

At kicker, there’s a half dozen kickers I really like, and I got two of them for $2 each – Gould and Gostkowski. The Gostkowski bid was made without any consideration of it actually sticking (I figured somebody would take him for $3 for sure).

Overall, the dollars on this team suggests it will be very good. I spent $200, and I walked away with $326 worth of players. Prices were crafted before the Tyreek Hill non-suspension, so probably closer to $320. That’s about as good as I’ve ever done in an auction.

Only downside of this approach is that there’s not as much wiggle room for roster moves. I’ll need to make moves along the way, so typically I like to have a couple of $1 and $2 players at the end.

Previously, I was in an auction with $200 teams for the magazine. That group has a lot more star power; I’ve got four of my top 15 overall players. But the overall value of that team clocks out as only $277.

If I could switch these two teams, I would. The Fanex league is built well for a format with no waiver moves. The magazine team is better situated for making adjustments along the way, but those rosters are locked.