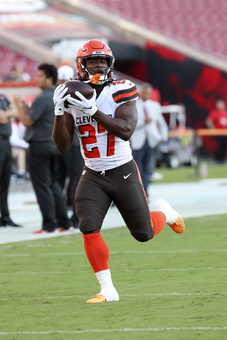 Which handcuff running back will be best going forward?

ASK THE EXPERTS appears weekly from training camp through the Super Bowl with answers to a new question being posted Thursday morning. How the guest experts responded when we asked them: Which handcuff running back, yet to do much this season, is the best to own?

This is easy – Kareem Hunt! He’s due to return in Week 10 after his suspension is over. Nick Chubb doesn’t need any help but Hunt offers the Browns a very valuable option as a receiver in addition to rushing. He is a free agent in 2020 so the Browns will use him to get back some value from having him on the roster this long. Should Chubb get injured, you have a one-time best back in the league ready to take over. I am looking forward to the second half of the season if I am holding Hunt.

Mark Walton has really been the RB3 in Miami, but he is making a push and I have stashed him on many rosters the past few weeks. Unfortunately he plays for Miami (strike 1) and, well, that might not be enough to make him a valuable wildcard.

Going into the season, Devin Singletary owners had high hopes of a big season. After getting injured he was replaced by the venerable Frank Gore. I look for Singletary to move up from running back 2 status and have a very successful second half of the season.

As a Dalvin Cook owner, I can only hope this doesn’t come true but the correct answer is Alexander Mattison. Barring an injury to Cook, Mattison is just a potential flex option but if he were needed to start then Mattison would be a clear RB1 in fantasy. Mattison is averaging a healthy 4.9 yards per rush and plays on a team committed to the run (Minnesota ranks third in the NFL with 160 rushing yards per game).

I have finally given up the ghost on Damien Harris. I could see him being a factor down the stretch should an injury strike, but New England is clearly going to use 3 different running backs no matter who goes down. My new ultra-deep stash is Tra Carson. The Lions are going with Ty Johnson, but he's unproven in a large role. J.D. McKissic is just a third-down guy. If Johnson either struggles with a large role or gets hurt, they'll plug in Carson, who they liked enough to poach from Green Bay when the Packers had roster crunch issues. Slightly higher profile is Wendell Smallwood. Terrible roster, but who knows when Chris Thompson will return, and Adrian Peterson is also dealing with an ankle injury. Smallwood could be a three-down back as soon as tonight. Just don't look for touchdowns.