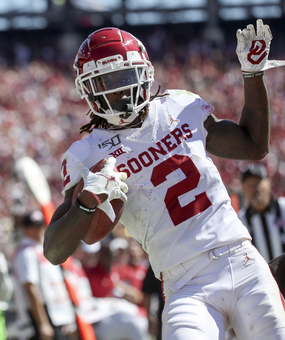 Lamb is latest Oklahoma receiver to head to the NFL

It seems like many considered CeeDee Lamb the best or almost the best of the rookie receivers. That’s from sifting through comments by the teams after the draft.

The Cowboys loved him; reportedly he was the No. 6 player on their overall board. They weren’t planning on taking a wide receiver in the middle of the first round, but felt they couldn’t pass him up.

Kyle Shanahan said Brandon Aiyuk was his favorite receiver, but that there was very little difference between him and Lamb. (So apparently, Shanahan likes Lamb more than the two Alabama receivers.)

Picking for Denver, John Elway said he was very surprised when Henry Ruggs was the first wide receiver chosen. The decision, in Elway’s eyes, was whether to select Jerry Jeudy or Lamb. So another vote (or partial vote, at least) in the Lamb column.

Everybody seems to like Lamb, and he’s got a decent landing spot. The Cowboys lost Randall Cobb, so they’ll plug Lamb into the slot, and I imagine he’ll make a nice impact for him in there. He’s better than Cobb at making people miss – just a much better, more athletic player, I think.

At the same time, I wonder if there’s a tendency to overrate Oklahoma receivers because of the college offense they player in – with their numbers getting inflated by the scheme.

As I pointed out in a trivia question in the not-too-distant past, no Oklahoma receiver has ever gone over 1,000 receiving yards in the pros. A bunch of them have been drafted high, but none of them yet has made a big splash. At least not yet.

Of the 15 Oklahoma wide receivers drafted in the last 15 years, one put up top-45 numbers in his first year. That’s using PPR scoring. That was Sterling Shepard, ranking 36th among wide receivers in the 2016 season, with 65 catches for 683 yards and 8 TDs.

If we look back at the last 10 years, Ryan Broyles and Dede Westbrook, not Lamb, had the biggest receiving seasons at Oklahoma.