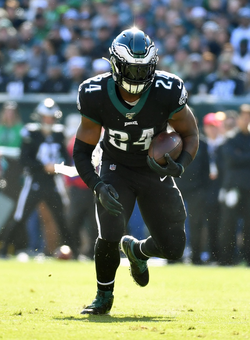 I kind of cringe whenever I see Jordan Howard selected in drafts. He's an ordinary talent, routinely outplayed by the other backs on the roster everywhere he's been, and he's going to a team that probably won't run the ball well, won't have many leads and will favor a committee. Otherwise, great pick.

Miami at least has an opening for a starter. Its holdovers are Kalen Ballage, Myles Gaskin and Patrick Laird. Ballage is Ballage, Gaskin a 7th-rounder, Laird an undrafted free agent whose ceiling is probably passing downs. The Dolphins don't want to see any of those guys starting this year.

But in addition to Howard, they added Matt Breida, and I think he's more talented than Howard, plus he'll be available in the flyer region of drafts, while Howard will be drafted more as a lesser starter. In fact, the two will probably split time -- so give me the one I can select a whole lot later.

Some will say, well yes, that's because their running backs were terrible, and Drake was traded while Walton was suspended/cut.

But Drake was never given an opportunity to carry the load while he was there. (Not just talking about Adam Gase, but also current coach Brian Flores.) In six games before he was traded, Drake carried the ball 4, 6, 12, 9, 10 and 6 times -- an average of under 8 per game. That's despite the team having nobody else on the roster. Now they've got Howard and Breida, and Laird might be a better receiver than either of them. Looks like a possible three-man committee. Maybe Breida or Howard becomes significant if the other one gets hurt, but they probably won't play in passing situations, and a three-back committee with another lesser light would still be possible.

Table shows all running backs who had at least 15 percent of their team's carries last year. That's where the Dolphins backs wind up (the ones who weren't below even that) -- down near the bottom, with just 15-20 percent of the attempts.

Maybe Howard or Breida is so good early on that Flores doesn't want to take that player off the field, and he winds up featured. Unless Breida happens to fall really far, won't be on my team.