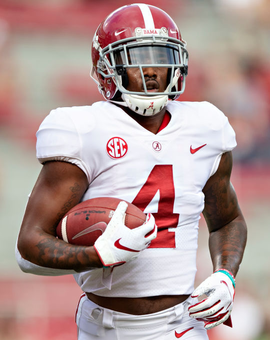 Best rookie receiver might come from outside the first round

In the vast majority of drafts, Henry Ruggs, Jerry Jeudy or CeeDee Lamb will be the first rookie receiver chosen. They were the first three pass catchers selected in the real-life draft, and there’s a tendency to have confidence that NFL teams know what they’re doing. But the numbers suggest we should probably be giving more consideration to wide receivers chosen later.

In the last 20 years, 33 wide receivers have put up top-30 numbers as rookies. That’s using PPR scoring (so when I say “top 30”, I’m talking about a blend of catches, yards and touchdowns). But only 15 of those 33 wide receivers were first-round picks – more of these notable pass catchers have been guys chosen in later rounds.

I’m not promising the top wide receiver this year will be a later-round guy. Jeudy (pictured) looks like a pretty smooth route runner, and he’ll be starting pretty much immediately, I think. Lamb looks pretty slick.

But it’s a near certainty that some of these later-round guys will hit. A few of my favorites:

Tee Higgins, Bengals. A.J. Green will be 32 on opening day, and he might be closer to the end that many of us realize. Higgins looks like a Green-type receiver, with the hops to come down with contested balls. Joe Burrow at LSU was very effectively lobbing in high balls, letting his talented wide receivers come down with 50-50 throws. I’m thinking Burrow-Higgins could develop into a really nice combo.

Michael Pittman, Colts. T.Y. Hilton is great, but he’s really small. He’s got some DeSean Jackson in him – a player who’s best when he’s running and operating in space. They need a bigger body who can operate in traffic, and they definitely need somebody besides Hilton who can pull down a bunch of a balls. That will need to be one (or both) of the two wide receivers they’ve chosen with second-round picks in the last two years – Pittman and Parris Campbell.

Laviska Shenault, Jaguars. He’s looks like another Anquan Boldin to me. They’ve got three other wide receivers who were essentially full-time players last year, but I would think Shenault will muscle his way into a role at some point.

Chase Claypool, Steelers. The Steelers had selected wide receivers with top-70 picks three years in a row (and all have had some success), so I was very surprised when they chose Claypool in the second round (with their first pick). I’m guessing that means they really liked him. JuJu is entering the final year of his contract. I wonder if this means they’re thinking they might not want to sign him to a big contract?

Van Jefferson, Rams. Like Pittman, his dad was an NFL player. Los Angeles has used three-receiver sets as its base offense for much of the last three years, so it might not be long before Jefferson gets on the field.

Bryan Edwards, Raiders. Las Vegas selected Ruggs in the first round, but he’s a smaller receiver who might be used as more of a deep threat. When they’re looking for a big body to run slant routes in the middle of the field, Edwards might be a better fit for that kind of a role. He lasted until the middle of the third round, but he would have gone earlier if he weren’t coming off a broken foot.