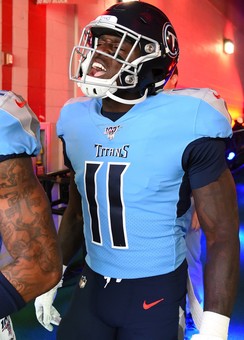 Draft or avoid receivers who shined as rookies?

Who’s up for a second-year receiver? There were a bunch of rookie pass catchers who had big seasons last year. How much improvement (if any) should be expected from these guys?

There are more of these prospects than usual this time around, with A.J. Brown (pictured), DK Metcalf, Terry McLaurin, Deebo Samuel, Darius Slayton and Diontae Johnson all having success at least at times as rookies. They all finished with top-40 numbers using PPR scoring.

Most of us, I think, tend to be optimists. If a guy as a rookie shows that he’s got something on the ball, the natural progression is for him to develop into something viable in Year No. 2. That approach worked last year for DJ Moore. He was the 36th-best receiver as a rookie, and he moved up to 16th last year (despite having Cam Newton for only two games).

In the setup for this one, note that none of these receivers from last year really knocked it out of the park. There was no Randy Moss, Mike Evans or Odell Beckham type receiver, who simply shredded the league from the git-go. All of those previously mentioned receivers finished between 22nd and 39th in PPR scoring last year. So in putting together a package of similar receivers, I’m leaving out guys who put up top-20 numbers in their first year. Instead, I will include all who ranked in the top 40 in the last 20 years, but who didn’t rank in the top 20. So no Anquan Boldin, Michael Thomas, A.J. Green, Tyreek Hill and 10 others. This is good (I think) because it reduces the dynamic of it being tough for somebody to duplicate a great year; it also eliminates Kelvin Benjamin, who tore his ACL before he even stepped on the field for his second year.

For the 31 receivers I’m using as comps, I’ve got a group that as rookies averaged 57 catches and 855 yards (run-rec yards), with 6.2 TDs. On average, they ranked 30th at their position in their first season.

If we look at how those guys did in their second seasons, 21 of them finished with better numbers, while 10 were worse. On averaged, they caught 10 more passes for 120 more yards, with a combined 13 more touchdowns. With PPR scoring, stats overall rose by about 14 percent.

In general, I think these numbers fall in the gut-feeling approach. The tendency is to be better (although perhaps by not quite as much as you would expect). In the chart below, I have black dots in front of the players who finished with lesser numbers in their second season.

With all of the players, of course, you need to look at his situation – the coach and quarterback he’ll be working with, and the other pass catchers who’ll be competing for balls. You have to look at his role in the offense. But in general, I tend to like this group. I would expect at least a couple of them to push their way into the top 20 this year.