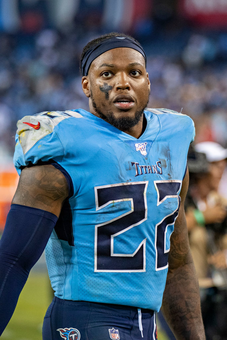 It’s not a good time to be a running back in the NFL. That position has become marginalized over the years by supply-and-demand factors, injuries and the structure of the labor agreement.

Raheem Mostert has been unable to convince the 49ers to revise his contract, despite running for over 200 yards in the NFC Championship game. Andy Richardson kicked around some ideas on Mostert today earlier on the site.

Separately, the Titans have been unable to reach an agreement with Derrick Henry on a long-term contract. Earlier in the offseason, he signed his one-year tender as a franchise player, guaranteeing him $10.3 million for the upcoming season. But if he doesn’t agree to a long-term deal before next Thursday, he won’t be able to sign an extension until after the end of the 2020 season.

Tennessee GM Jon Robinson says negotiations have been hurt by the coronavirus pandemic. With limitations on fan attendance and the possibility of at least some games being canceled, the salary cap probably will decline next year – perhaps significantly.

“I'm a big analogy guy,” Robinson said in a article at Paulkuharsky.com.. “It's no different than if I was if I was working for Pepsi or Coke, and I knew that we weren't going to have as many sales. …You wouldn't go out and buy a new house.

"I don't know what that's going to look like. It's something that we will certainly talk about. You know, we've talked to the players and the reps. There's a lot of uncertainty right now with everything, and I would say certainly with the salary cap too, because we've got to be mindful. What you don't want to do is do something and then you've got to undo it or try to unpack it a year, two years from now, given the uncertainty of the salary cap.”

But with the case of running backs, it’s not just the pandemic. Salaries have been lagging anyway. With the punishment that’s dished out at that position, injuries are more common, making it riskier to hand out rich contracts. And with the shelf life at that position tending to be shorter, it’s hard for players to reach true free agency while they’re in the prime of their career.

Many teams tend to want to rely to on younger players at running back, running them into the ground while they’re cheap. When backs reach the end of their four-year rookie contracts, they’re often discarded, with the team plugging in a new youngster.

I’m not a big fan of the current labor deal, in which players are cost-controlled for four years. With running backs, it would be a big upgrade if they had some ability to re-visit their contracts after a year or two.

When you compare contracts of running backs to wide receivers (who tend to have longer careers) it doesn’t look fair.

Mostert currently is slated to make less than half as much as wide receivers like Willie Snead, Mohamed Sanu and Marquise Goodwin. That doesn’t pass the smell test.

Similarly, Henry (as it stands now) will make less this year than Alshon Jeffery, Tyrell Williams, Tyler Boyd, Larry Fitzgerald, Keenan Allen and others. Henry is doing more than any of those guys to cause TV sets to turn on and fans to show up – he’s the kind of player fans want to see.

It’s not right. You won’t hear me complaining about any running back holding out or demanding a trade or doing whatever else he can to leverage a few more bucks out of teams.

With Washington having released Derrius Guice, the chances of Adrian Peterson being its starting running back have increased. At 35, he potentially could become the league’s oldest-ever 1,000-yard runner. Currently, there are only two 35-year-olds who have gone over 1,000. Who are these backs? They did it 20 years apart. (Both of these backs were 35, but both were over 4 months younger than Peterson.)