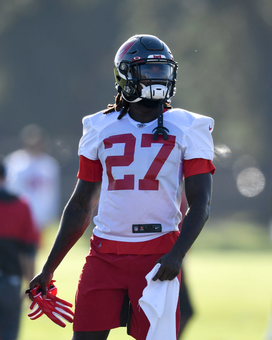 Which Florida committee running back is best?

ASK THE EXPERTS appears weekly from training camp through the Super Bowl with answers to a new question being posted Thursday morning. How the guest experts responded when we asked them: Which Florida committee back is best?

I lean Ronald Jones, though James Robinson isn't far behind. Common link to both of those guys - I don't think much of Leonard Fournette. I don't know what to make of Miami; Myles Gaskin was their busiest back (and the only pass-catching back) in the ugly loss to New England. I added some Gaskin shares this week, but it's all wait-and-see; there's zero floor there.

That's a tough question! I'd have to go with... man. This is just cruel. Not anyone on Miami. Ronald Jones was the busiest with 19 touches but Leonard Fournette (5-5 rush, 1-14 receive) is bound to cut into Jones workload. James Robinson actually did well for the Jags (16-62 rush, 1-28 receive) and Chris Thompson was a nonfactor. I guess I would have to go with Robinson? Nice question. Yeah, right now, I would lean towards Robinson. My gut says Fournette eventually is the best choice, but too hard to say right now.

While I have stayed away from all Florida backs, Ronald Jones has the versatility to be a consistent contributor all season long. Even if Fournette's role increases, RoJo has better playmaking ability, especially on 3rd down. Brady relied on James White for many years so not hard to envision Jones emerging as his go-to guy out of the backfield. Tampa Bay's overall offensive talent is significantly better than Jax and Miami, so logic would dictate that the TB backfield will significantly outperform both of them.

Ronald Jones. I think he’s pretty good, and now that he’s been around for a couple of years, I think he has a better command of the offense and what it takes to be a successful pro. Even last year, he did some good things. He was one of only four backs who caught 30-plus passes and averaged 10 yards per catch. And he had 6 runs of 20-plus yards despite getting only 172 attempts (really, they should have used him more last year). I think he’s going to hold off Leonard Fournette for at least the time being and be the starting, featured back on what should be a top-10 offense.

Tampa Bay's Ronald Jones II. Or is he Jr.? His coach said he was the starter (“the guy”) before the season started and he proved it with 66 yards on 17 carries in week 1. Throw in three passing targets (2 for 16 yards) against a good Saints defense and I like him over every other Floridian running back.

Miami looks like a total mess, as Jordan Howard may not do anything other than score touchdowns but takes the ceiling off of everyone else. And Tampa Bay looks like another mess, not only because Bruce Arians wasn't lying (for now) that Ronald Jones is the guy, but also because the offense as a whole was messy in Week 1. So give me James Robinson, I guess, getting so much work for a punchy team that decided he was better than Leonard Fournette, with Fournette himself as my second choice, figuring RoJo can't hold him off and there must be better days ahead for Brady and co.

I can't get behind Ronald Jones. The team doesn't trust him in pass protection -- it's the only reason LeSean McCoy is still on the roster, to play a third of the snaps last week with just a single touch -- and that will always limit him. If at some point they trust Fournette more in the passing game, that will be it for Jones. I tried unsuccessfully to add Myles Gaskin in a couple of places this week, who looks like the best of a bad lot in Miami. But I will vote for undrafted James Robinson, who will start and play the most in Jacksonville. Won't be a star, but looks like the safest starter from this group, with some 10-15 point weeks along the way.