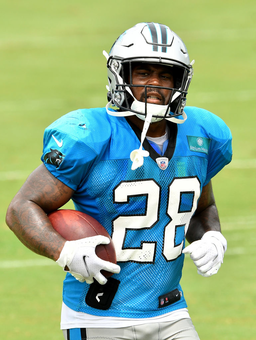 Which injury replacement intrigues you?

Davis and Schultz among choices

ASK THE EXPERTS appears weekly from training camp through the Super Bowl with answers to a new question being posted Thursday morning. How the guest experts responded when we asked them: Which injury replacement are you intrigued by?

While Dion Lewis is the easy answer here, I'll point at Dalton Schultz as another player worthy of a waiver wire add. The Cowboys lost Blake Jarwin for the year after Week 1 and it seemed that his replacement, Schultz, would have little chance to do much with three vaunted wide receivers there to sponge up the targets. That was wrong. The third-year tight end was a fourth-round pick in 2018 and hasn't done much until becoming the No. 1 tight end for the Cowboys in Week 2 and beyond. His first game starting saw him with ten targets that became nine catches for 88 yards and a touchdown. Granted - the Cowboys passed for 450 yards in the shootout with the Falcons. But Dalton attracted the team-high in targets and those wideouts will always garner plenty of attention from the secondary. And the Cowboys defense looks like it may invite many more shootouts this season.

I like Mike Davis. I think he’s going to be a full-time kind of back, and I think he’s going to catch a bunch of passes. I like what they’re doing offensively. Could be kind of decent for the next 3-5 games filling in. Devonta Freeman might be more of a long-term starter, but I would feel better about Davis’ next three games than hoping to getting something more from Freeman.

I loved Saints wideout TreQuan Smith on Monday night. He stepped into the Michael Thomas role much more than Emanuel Sanders. I admit I drafted Smith in 2018 in dynasty leagues and have desperately been waiting for the third-round pick to do something. He showed flashes of his potential in two great games in his rookie season. I am hoping for more of the same in 2020. Even when Thomas returns if Smith can be a strong WR2 it will go a long way toward giving him a breakout season.

I believe Broncos rookie wideout K.J. Hamler will surprise in a good way for fantasy teams in need for the rest of the season in Denver.

Unheralded Illinois State's James Robinson has seemingly taken control of the RB room in Jacksonville. He was a preseason No. 4 on the depth chart, but personnel changes due to free agency and injury created an opportunity. Robinson has made a splash, tallying 102 yards with a TD day in Week 2. The Jags have gone from tanking mode to upstart status, but get no respect. Yet they are 2-0 and looking for more, and Robinson is positioned well to be a solid contributor the rest of the season.

I like Mike Davis, even conceding he’s on a timer. The 4-6 week timetable for Christian McCaffrey is 4-6 weeks of Davis putting up (maybe?) 60-70 percent of McCaffrey’s production. That’s a sure weekly starter, even if he’s useless in Week 8. To me that’s better than a committee guy the rest of the way.