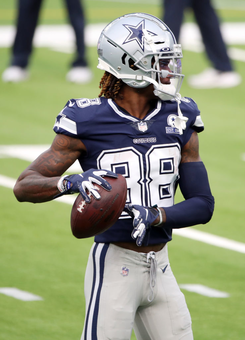 Who will be best of the rookie wideouts?

Lots of love for Lamb

ASK THE EXPERTS appears weekly from training camp through the Super Bowl with answers to a new question being posted Thursday morning. How the guest experts responded when we asked them: Which rookie wideout will have the best career?

I'm convinced that CeeDee Lamb is on the verge of stardom. Like anything, it comes down to timing and opportunity. Lamb is in a loaded offense where he is not the focal point, so there's no added pressure. Most of the skill players are at an age where they could play together for multiple years. So far, Lamb has shown weekly improvement, with a strong chance to break out this week in a home game against the Browns' Swiss cheese pass defense. Dallas assigned CeeDee Lamb the coveted jersey No. 88 for a reason. If he stays primarily in the slot for a year or so, he has the potential to launch an Antonio Brown type of career.

On the basis of what the player can do and nothing else, my vote might go to Chase Claypool — basically another DK Metcalf, but more refined than Metcalf was a year ago, and with a willingness to work that draws praise from all corners. The problem is that Ben Roethlisberger is 38, and after last season it’s hard to trust that the Steelers will have much of a successor in place when Roethlisberger hangs it up. So give me CeeDee Lamb, on the other end of 27-year-old Dak Prescott and with much of what he showed at Oklahoma already on display in Dallas. Lamb belongs, clearly, and is going to belong not only for the rest of 2020, but for all of the 2020s.

In the preseason, the three selected in the top 20 generated the most buzz — Lamb, Jeudy, Ruggs. I haven’t seen anything to suggest any of those players are going to bust. But there are another 10 rookies receivers who all look like they’re going to have solid careers. Definitely Claypool, Aiyuk, Reagor, Jefferson, Higgins, Pittman, Edwards and Gabriel Davis. I would expect that at least a couple of those later-round receivers will end up being better than any of those three who were chosen in the top 20. Claypool is a physical freak. With Aiyuk, I like that he’s working with Shanahan.

Without a doubt, have to like CeeDee Lamb the most of the rookie wideouts. He's already become an integral part of the Cowboys offense and more importantly, they like to throw the ball -- a lot. Add in he has the best quarterback of the rookie wideouts and he'll get to grow and flourish with Dak Prescott. This was a gifted class and certainly many will end up as stars, but none of them have as advantageous of a situation as Lamb.

It sure looks like the Cowboys got a good one in CeeDee Lamb. Once upon a time I was a Packers fan, and that part of me wishes Green Bay had traded up for Lamb or one of the other first-round wideouts rather than a quarterback. In Dallas, you wonder if he'll ever be a true go-to guy with Cooper and Gallup there too. But he's a talented guy who should be productive for a lot of years. I'm also impressed by what I've seen out of Justin Jefferson, who could be the No. 1 in Minnesota in a couple of years. Coming into the season I was a big Jerry Jeudy fan, and still am. But the quarterback and offense concern me; he might labor for a while on lesser offensive teams.