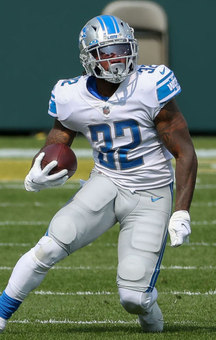 What kind of long-term value the rookie running backs hold? There are a number of them that haven’t done much yet, but who look like they’re going to do a lot more in the future.

Most, I think, agree that Clyde Edwards-Helaire and Jonathan Taylor are the best of the first-year running backs. If we’re walking into a dynasty draft today, I’m pretty sure they would be the first two chosen. (That’s if you’re picking players with the ability to hold onto them indefinitely.)

But CEH, at least for this year, now has another viable back sharing time with him (with the team having signed LeVeon Bell). And Kansas City will have Damien Williams coming back next year; he could get a decent amount of work. And in Indianapolis, Taylor hasn’t yet really lit up the league.

With a half-dozen other rookie running backs, they look like they could be pretty good in the future.

J.K. Dobbins, for example, looks like he’ll move at some point into a more featured role for the Ravens. He’s 9 years younger than Mark Ingram, and he’s got a more diverse game than Gus Edwards. He looks like he’ll be a good pro for a lot of years.

Another 21-year-old back, D’Andre Swift, looks like he’s going to be good for the Lions. Detroit has misfired on a lot of running back picks over the years, but Swift looks legit. He had his first 100-yard game last week, and they’ll likely continue to expand his role. They’ve been using Adrian Peterson as their starter, but he’s 35 – Swift is a lot younger and faster, and a lot better in the passing game.

James Robinson wasn’t even drafted, but he’s been playing well for Jacksonville. He runs hard, and he’s a capable pass catcher.

Antonio Gibson was primarily a wide receiver in college; he carried the ball only 33 times at Memphis. But Washington selected him early in the third round, and it looks like he’s successfully making the switch to tailback. They’ve been starting him, and he passes the eyeball test – he’s a big, talented guy. I will be interested to see what he can do this week against a really bad Dallas run defense.

AJ Dillon hasn’t played much yet, but he sure looked powerful on a couple of runs last week early in Green Bay’s game at Tampa Bay. He’s a big, physical runner. To me, he looks like he’ll be a big factor at some point. The two running backs ahead of him on the depth chart (Aaron Jones, Jamaal Williams) are both in the final years of their rookie contracts, so I would expect Dillon will be one of Green Bay’s two main runners at the start of next year. Jones has a calf injury; if that reduces his playing time in Houston tomorrow, Dillon could make a case for more playing time now against that lesser run defense.

Two other rookie backs, Cam Akers and Zack Moss, have missed some time with injuries, but nobody should be giving up on them just yet.

If I were walking into a dynasty draft today, my running back list would look something like this. This is assuming PPR scoring (and operating under the assumption that teams could keep players indefinitely).

On these rankings, rookies are tagged with black dots.

I turn my attention to dynasty leagues each Saturday, addressing a different position each week. To see past articles, use the “past issues” navigation tools on the right side of the page.