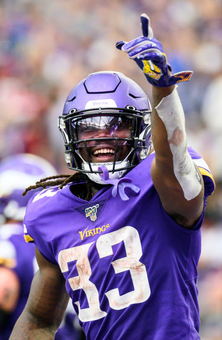 Ian Allan answers your fantasy football questions. In this edition: Trading Dalvin Cook. Can injured running backs like Raheem Mostert and Austin Ekeler return to prominence? Does Davante Adams or Ezekiel Elliott have a better long-term future? And more.

I'm in a 12-team with deep rosters. This season I have a good shot at the playoffs, and while I am not a top-4 team I have good playoff matchups and am not writing off 2020. I am considering offering Dalvin Cook, who I could keep one more season, for DK Metcalf, who could be kept for 5 years. My potential trade partner has a very good team deep at WR and Cook would become his best RB, so he may be interested. I see this as a downgrade in 2020 weekly points vs. a nice keeper for the future. But I would also be making a very good team better this season, a season I could win, something I have not yet done in this competitive league. Thoughts?

It would be tough to part with a player of Cook’s ilk, but I would be inclined to play the long game. Is Mike Zimmer still coaching that team next year? Or is a completely different regime with a different offense that’s not as friendly to running backs? Injuries are common with running backs, and Cook has had problems with them in the past. I would be awfully tempted to instead lock up Metcalf for the next half decade. Russell Wilson is just entering the prime seasons of his career, and it looks like Metcalf will be the leading receiving during that run.

Mostert is available in my league. How do feel about his rest of season prospects, given the injury battered state of the offense? I'd have to drop Mattison (I don’t have Dalvin Cook).

Mostert isn’t playing this week, but I expect he’ll be in the starting lineup and pretty much healthy when they return from their Week 11 bye. I would move quickly to get him. With Mattison, you’re holding onto him to cover the possibility that maybe Dalvin Cook gets injury, moving Mattison into a starting role – you’re hoping that maybe there will be some quality starts coming later in the year. With Mostert, you know that he’s going to get back in there, and he’s already proven that he’s a good back. He’s got the right feel for how to run in that Kyle Shanahan system. Mostert has averaged at least 5.6 yards per carry in each of the last three seasons. He’s played in only four games this year, of course, but he’s been productive when he’s been out there. He’s averaged 75 rushing and 35 receiving yards, with touchdowns in half of those starts. Even if you knew Mattison would be starting some games, Mostert might be the choice.

What offers should be considered for Ekeler since he doesn’t look to possibly return till week 12?

If you can get something of value for him, I’m all for it. I don’t know that he’s going to return at all, and if and when he does, it might be as more of a third-down back rather than a heavily used guy. The Chargers have had success with four other running backs in the last two weeks: Justin Jackson, Joshua Kelley, Troymaine Pope and Kalen Ballage. I don’t think there’s any question that this is a RBBC team, and all of those guys are more rugged runners between the tackles. Ekeler might come back and start averaging about 4-5 catches and 8-10 carries per game, but I don’t think you’re sitting on a lottery-ticket type player.

I am hopeful that we’ll get to see a healthy Samuel play a few games this week. He broke his foot in the offseason, keeping him out for the first three weeks of the season. Now he’s got a hamstring injury that will cost him a third straight game on Sunday. San Francisco in general has been torpedoed by a bunch of injuries. But I would like to see him on the field so we can start figuring out whether he or Brandon Aiyuk will be the best wide receiver on that team (catching passes from whatever quarterback they obtain in the offseason). Samuel is probably the best receiver in the league on end-arounds and push passes – get the ball in his hands, and he’s like a tackle-breaking running back. We know he’s good on slant patterns. But I haven’t gotten a chance to see him operate much as a more conventional receiver (I’d like to see him run more downfield routes and make some contested catches). If we’re drafting wide receivers for 2021 today, I would think Aiyuk and Samuel would be in the same area, and they might both be in my top 30.

Would like your opinions on the future. Over beers with friends, we all agree that both John & Pete who were looking like football gurus their first 4-5 yrs in Seattle, will end up being talked about in a negative manor in the future – as the guys who wasted what could have been a Brady-like career for Wilson. Going on 5 years now one of worst OL in NFL and since the LOB left the absolute worst defense in NFL HISTORY to ever play the game. These guys have done nothing to help their Hall of Fame QB succeed. In fact I guarantee you that without Wilson the last 5 years would have been .500 or below for Seattle. Do you agree, that Pete and John have become complacent? Because i am getting fed up with their excuses.

The timing on Pete Carroll signing an extension was odd. He’s supposed to be a defensive guru, but they’ve been unable to put anything together on that side of the ball. They just got gouged for 44 points in Buffalo, and I expect similar kinds of problems against the Rams on Sunday. They’ve got a Super Bowl caliber offense, but with the defensive problems, I don’t see how they’re supposed to beat teams like the Packers, Bucs and Saints in the playoffs. If they end up getting cashed out because of defensive issues, they may regret committing themselves to a coach who’ll be a 74-year-old when that extension expires.

I am in a league that uses a salary cap. The budget at the auction is $200 and your drops and FA bids affect your salaries weekly – you are always are capped at $200. I have Chase Claypool at $34 and these other receivers – Diggs, McLaurin, DJ Moore and Aiyuk (can start 4). My RBs are Zeke , Robinson, DeeJay Dallas and James White. If I dump Claypool I can probably pick up Mike Davis by spending all my FAAB plus his $34. Hate to lose him, but I am strong at WR without him and a mess at RB.

If you knew that Davis was going to be Carolina’s starting running back for all or most of the remaining eight weeks of the season, then it could be a discussion. But we could be talking about just one week (and playing against the league’s No. 1 run defense). I wouldn’t be willing to part with Claypool for that. There’s still almost half of the season left, and there will be injuries and poor matchups to deal with. Diggs, Moore and Aiyuk still have their byes coming up.

Three-man keeper league, you get to keep them as long as you want. I was offered Elliott and Ridley for Davante Adams and nobody that I would keep. Then my 3 keepers would be those two and Conner or Helaire. Thoughts? I’m almost out of the playoff race if that matters.

The planning at this point definitely needs to be with 2021 in mind. Clyde Edwards-Helaire will be one of your keepers; he’s had a good (not great) rookie season, but he’ll presumably get better and is a key cog in one of the league’s premier offenses. You’ve got Adams, and he would be one of the first three receivers chosen if you could have anybody you wanted at that position. If you go with the CEH-Adams tandem, then you’ll need to find a third keeper. Maybe or probably Conner, but we don’t know yet where he’s playing (he’s in the final year of his contract, and the Steelers might not want to commit much money to him – they have some other backs).

The option being offered to you here, then, is to trade in the Adams-Conner tandem for Elliott and Ridley. Ridley is a solid young receiver who’s had some success; he would be an upgrade over Conner as the third keeper (I think). But if you go that route, you’re giving away Adams while taking on Elliott. I would be nervous about that. Elliott hasn’t been as explosive the last two years – doesn’t look like the difference-making elite talent he’s been in the past. Is he going to get back to being what he was a few years ago? He doesn’t seem to be running with the same juice. The Cowboys don’t have the crushing offensive line that they had previously, and nor do they seem to have the same commitment to running the ball. Adams, with that well-developed rapport with Aaron Rodgers, looks like a much safer choice. That would be hard to part with. Adams will be 28 on opening day next year, while Elliott will be 26.

Value your opinion....based upon each player's matchup for this week and team write up in yesterday's "Weekly" - non-PPR league, 1 point for every 10 yards passing, 6 pts for the TD pass (half point deducted for each INT) nice bonus for between 200-299 yards passing, BIG bonus (40 points) for over 300 yards passing - who is my best bet: Burrow, or Tua?

I think if you asked Andy Richardson or Justin Eleff, those guys would say Tua. Andy wrote up that capsule, and he was talking about 2 TD passes. I was talking to Justin before the podcast, and he was talking about Tagovailoa being another Russell Wilson. I’m more skeptical. I’m not crazy about the modest talent around him, and I’m remembering back to two weeks ago, when he passed for 93 yards against the Rams. I would go with Burrow. I understand that Pittsburgh has a feared defense, but it’s been giving up a fair amount of production. Until Garrett Gilbert finished with 243 passing yards and one touchdown on Sunday, the Steelers had allowed 2 TD passes in six of their other seven games. Not a great matchup for Burrow, but I would roll with him. He’s passed for over 300 yards in five of his last seven games.