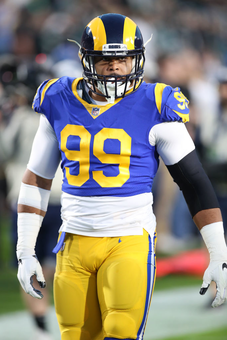 Rams have piled up sacks against Russell Wilson

For this upcoming weekend, the Los Angeles defense looks better than I would expect. It’s on the road against one of the league’s elite quarterbacks (Russell Wilson) but it’s been able to have some success against him. A lot of success, in fact.

Seattle usually doesn’t have a great offensive line, and Wilson has a playing style that makes sacks easier. He tends to hold onto the ball, extending plays in hopes of creating big plays. He has a lot of success doing that, of course, but it also tends to result in more sacks.

Especially against this kind of defense, which has a lot of talent up front. When these teams played two weeks ago, the Rams had 5 sacks. They also had 5 and 6 sacks in their previous two meetings against Seattle (with Seattle’s offense scoring only 12, 16 and 20 points in those games.)

It got me curious, so I pulled out previous meetings between these teams. (The defenses and played have changed, but the Rams have always tended to have lots invested in their defensive line.)

If we look at the last 16 meetings between these teams (dating back to 2013), that’s a full NFL season of work. Wilson in those games has been sacked 64 times. That’s exactly 4 per game.

Aaron Donald (pictured) has played in 14 of those games. He’s had 13 sacks against Seattle, with 23 other quarterback hits and 7 other tackles for loss (according to the stats at Pro-Football-Reference.com).

Factor in also that this defense has been hot recently. It’s scored touchdowns in four of its last six games. It allowed the fewest yards and points in the regular season. It’s a good defense, with a great cornerback (Jalen Ramsey) who matches up well against DK Metcalf.

Problem with going against Wilson is that he doesn’t tend to turn the ball over. The Rams got 2 interceptions and a fumble off him earlier this year, but that’s really rare. Wilson in his last 16 starts against the Rams (despite all those sacks) has thrown only 8 interceptions, and with just 9 fumbles (4 lost).

So as you sort out the defenses for Week 18, I think the Rams are in the conversation. The Bucs aren’t quite as good, but they’re playing against a Washington offense that has a lot of problems. The Steelers have been able to generate a lot of sacks and takeaways.