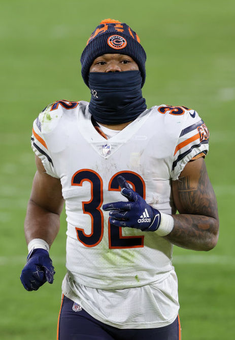 What do you think accounts for the David Montgomery explosion the final 6-7 weeks of the regular season? The easy answer is that Trubisky took over then (after the bye), but is it really that simple? Do you think this kind of production will continue into next season? I have always liked Montgomery and felt he was underutilized, but maybe the Bears have seen the light on this guy. Thoughts?

I’m not a big Matt Nagy fan. He’s been there for three years. It hasn’t happened. They’ve ranked 27th in rushing in each of their last two seasons. That’s a combination of the line not being good enough and there being no commitment to running the ball. I think David Montgomery is a solid enough back, but I don’t think Chicago has any real interest in using him extensively.

There was an uptick, as you note, in Montgomery’s production late last year. They went back to Trubisky at quarterback, and that probably played a role. Unlike with Nick Foles, defenses had to respect the ability of the quarterback to potential keep the ball and run outside. And with T-Biscuit being a limited passer, that probably helped to translate in more running plays – they didn’t want him out there trying to do too much on his own.

But a factor was also scheduling. In December the Bears had a four-week stretch against the Lions, Texans, Vikings and Jaguars – four of the very worst defenses in the league. A lot of running backs would put up good numbers in a month if given the opportunity to play four against those defenses. When the Bears then closed their season with two games against better teams, Montgomery’s production reverted back to being more in line with what he’s done for most of the last three years – 3.1 yards per carry against the Packers and 2.6 at New Orleans in the playoffs.

On this one, I will defer to the larger body of work. I don’t expect that we’ll now see Montgomery moving up into the top 10 at his position.

I'm intrigued by the 49ers' backfield. They pretty consistently produce running back production. Looking at dynasty keeper options. Do you envision Jeff Wilson Jr. as a guy who should be kept in a 12-team PPR league (12 players are kept per team). Is there a chance that he can be the most productive RB in SF next season?

I think he’s their 2nd-best running back right now. He’s not as good as Raheem Mostert, but I believe Wilson is better than Tevin Coleman, Jerick McKinnon and JaMycal Hasty. He had a couple of big games last year, running for 112 yards and 3 TDs at New England and 183 yards in a Week 16 game at Arizona. He also finished the season with 10 touchdowns. Only 27 players last year scored double-digit touchdowns, and Wilson arguably was the most surprising member of that group.

On the downside, Wilson wasn’t good enough in the passing game, catching only 13 of the 28 passes thrown his way. There were 93 other running backs last year who had at least 10 passes thrown their way; all of them caught at least half of their targets. That’s a concern, though I wouldn’t go as far as to say Wilson is a Alfred Morris type guy with hands of stone who simply can’t catch; previously as a pro, Wilson caught 15 of the 20 passes thrown to him.

Wilson isn’t very big – just 194 pounds. I think that makes him a forgettable Matt Breida-type guy who’s looking to be a contributor and perhaps fitting in at some point for some stretch of games. But it’s February, and I would think the 49ers will draft or sign another running back or two who’ll be a factor. I’m not confident Wilson will be one of their top 2 running backs in 2021.

Circling back to your 12-team league, with 144 players being selected. Right now, perhaps he’s one of the top 50 or 60 running back prospects, making him roster worthy. But he may be more of an afterthought by the time camps are opening.