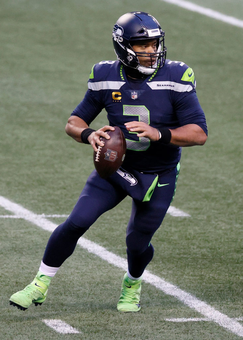 Momentum builds for one or both being dealt

So who had Russell Wilson being dealt before Deshaun Watson? Neither blockbuster has happened yet, and various representatives and media sources are throwing cold water on the deals happening -- maybe neither one will. But these things take on a life of their own, to the point where it's fair to wonder if it's more a question of when than if, on at least one of the two.

Ian Rapoport of NFL Network doesn't expect anything to happen with Watson soon; he said yesterday that "no one believes Watson will be traded," with the "no one" apparently representing other teams' GMs who are having their interest rebuffed. Question, did anyone think Jared Goff and Carson Wentz would be traded at this time a year ago? Watson is saying he won't play for Houston. How does that get resolved? At some point Houston either needs to make a disgruntled player happy (doesn't seem to be possible in Houston) or move him for assets.

The Russell Wilson developments are a hoot. The relationship between him and the team appears to be broken. Yesterday his agent told ESPN that Wilson hasn't requested a trade, "but if he WERE to be traded, he'd waive his no-trade clause for the Cowboys, Saints, Raiders, and Bears." Talk about having it both ways. Depending on how you want to read it, you could suppose 1) Wilson wants to stay in Seattle, and the Seahawks will intelligently make that happen, or 2) Wilson will soon be traded to the Cowboys, Saints, Raiders or Bears.

Seattle doesn't have a viable backup quarterback, so a Wilson trade to the Cowboys or Raiders makes the most sense. Dallas could potentially work out some kind of sign/franchise and trade with Dak Prescott, if they were so inclined, while the Raiders could ship off Derek Carr, presumably. Marcus Mariota? The Raiders would still need to send Carr somewhere.

Personally I can't understand Houston NOT trading Watson, if his firm anti-Texans stance can be believed. And I can't fathom why Seattle would consider shipping off Wilson rather than finding a way to make the guy happy and repair the relationship, since unlike Watson in Houston, that actually looks possible.

Regardless, two of the game's very best quarterbacks might realistically be on new teams when next year rolls around. It's stunning.

Since Watson entered the league back in 2017, he and Wilson have been responsible for some of the very best seasons turned in by any quarterbacks. In those four seasons, each has posted 3 of the top 25 in typical fantasy scoring (4 point TD passes). Watson was hurt for most of 2017, while Wilson was "only" the 12th-best fantasy quarterback in 2018, finishing outside the top 25 over the past four years. But both have been pretty remarkable.

Maybe this Seattle thing will blow over. Maybe Houston will play hardball with Watson, forcing him to play for them if he wants to play anywhere in 2021.

But how often do these situations end with both sides patching things up and working it out? Not as often as they end with a split. I'm not going to be surprised if one or both quarterbacks are traded before the NFL Draft seven weeks from now.