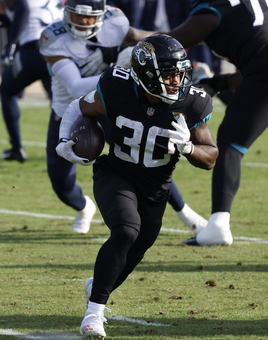 In a couple of discussions recently -- with rookies like Javonte Williams and Najee Harris, but I think one or two other times -- there's been a debate in the comments over how well they'll do if they're stuck in a lesser, losing situation. In the past we've done studies indicating the best running backs (yards, touchdowns) tend to come from winning teams.

But PPR scoring has become more prevalent in recent years -- it's currently our default, and that's true of most major fantasy sites -- and that maybe changes things. In non-PPR scoring, running backs needed to be averaging 80-90 yards and getting in the end zone to give you a 15-point week. Now a guy catches 5 balls for 50 yards and he's getting you double-digit points without running for any yards at all or scoring. Those kind of numbers are possible on terrible teams (more possible than a guy rushing for 1,200 yards and a dozen touchdowns), increasing the odds of getting a very good back from a very bad team.

James Robinson (pictured) is 2020's best example, playing on the worst team in the league, the 1-15 Jaguars. He averaged just 7.6 fantasy points per game as a runner, but an additional 7.2 as a receiver by catching 49 passes for 344 yards and 3 TDs. He was last year's 7th-ranked PPR back. An extreme example, but I wonder how common it is these days for a top-10 back to come from a bad team. So I ran the numbers.

I pulled out the top 10 running backs from each of the last 10 years -- 1oo total backs. And then I looked at the win-loss records of each of those teams. (Yet another table that's going to be a little trickier once teams are playing 17 games, but at least we've got winning percentage to work with.) Here are the results.

Turns out....your odds of landing a top-10 fantasy back are indeed better with good teams than bad. Depending how you want to look at it, a lot better.

If you're wondering how many James Robinson-types there were, well, he was unique -- the only top-10 back from a 1-15 team. That's not really fair (there are only 2 other teams in the last decade that have won 1 or fewer games), so let's look at the 2-14 and 3-13 teams. There have been 5 top-10 fantasy backs from teams that won 3 or fewer games (easy math, it happens 5% of the time). Most impressive in that group is Jamaal Charles, who rushed for 1,509 yards for a 2-14 Kansas City team back in 2012. But Charles was an awfully impressive back.

A total of 23 top-10 running backs in the last 10 years came from teams that finished 6-10 or worse. Roughly speaking, about a 1 in 4 chance of pulling a top-10 fantasy back from a team that loses double-digit games. Not great. So if you're not expecting the Steelers or Broncos to win more than 6 games this year (I personally am), probably best to steer clear of those running backs.

So it's not impossible to pull a top-10 back out of a bad team, but the more wins the better, and as the wins get fewer, so do the number of successful backs. When in doubt, favor the lead guy from a team you expect to win double-digit games. Much better odds of that guy hitting it big.