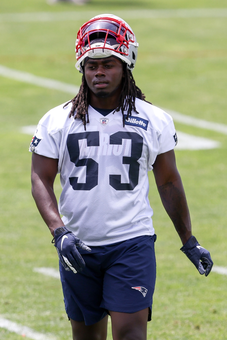 Ian Allan answers your fantasy football questions. In this edition: Do the Patriots have a sleeper rookie running back? Is CeeDee Lamb headed for a breakout season? Best-ball drafting strategies. And more.

What are the chances Rhamondre Stevenson gets significant carries and becomes a goal-line back? James White is aging and Michel is injury prone. The coaching staff views Stevenson as a LeGarrette Blount type

If we’re drafting today, with 12 teams each selecting six running backs, I don’t think Stevenson should be one of the 72 running backs selected. Maybe he plays his way into some kind of a role, but there are a lot of guys like that around the league. For now, he’s a fourth-round pick trying to show that he’s worth putting on the field, and they’ve got a bunch of other options.

Damien Harris, I think, will be their opening day starter. He’s more experienced and played well enough last year, averaging 69 rushing yards in the 10 games he started. Harris in 2019 came into league as a more heralded prospect than Stevenson – selected a round earlier, and with more production in college. Harris didn’t actually get on the field in his first season.

The Patriots still have Sony Michel, and I would select him before Stevenson. He’s had some durability issues, but he’s got some ability. He averaged 5.7 yards per carry last year, 2nd-best among all running backs with at least 50 attempts. (Michel averaged 65 rushing yards in the six games he’s started). Michel is more experienced, and he’s also in a contract year.

The comparison of Stevenson to Blount is a good one. We’re talking about a bigger, slower power-oriented back. I’m not sure if he’s quite as big, though. Stevenson was listed at 246 pounds at Oklahoma last year, but he weighed 231 at the combine and is listed at 227 pounds now on the team’s website.

I’m not promising that Stevenson won’t do anything. He’ll show up at camp and he’ll compete. I expect he’ll play well enough that they’ll give him a running back number before long (at the recent minicamp, they had him wearing #53). Maybe he’s just really impressive, or perhaps those other guys get hurt. But the most likely outcome, I think, is that Stevenson would be their No. 3 tailback on opening day. I think it’s probably more likely that he doesn’t start any games in 2021.

I don’t think James White is part of this decision. He’s a different kind of back – a third-down guy who’ll play in obvious passing situations. I think he’s secure in that role. I wouldn’t call him “aging”; he’s 29, and I think he could have another 2-4 seasons in that role. I don’t think there’s any chance of the Patriots even considering plugging in Stevenson to replace anything of what James White.

The injury concern for Amari Cooper will be something to monitor, but I am very bullish on CeeDee Lamb as a top-10 receiver. He seems very similar to Calvin Ridley last year and although projections may say Cooper should score more if he plays all 17, I think Cooper will miss a few games. Reports are he may not even be ready for start of training camp. Lamb was Jerry Jones’s pick and his shiny new toy he will want to be involved. Thoughts?

I would not select Lamb as a top-15 wide receiver. He won’t necessarily even be one of the top 2 receivers on his own team. Cooper and Michael Gallup are both really. I don’t see Cooper’s ankle as much of an issue. He underwent offseason surgery, but they’re saying they expect him to be 100 percent when camp opens. So I would not be excited about selecting Lamb to be the No. 1 wide receiver on my fantasy roster.

At the same time, Lamb looks like he’s for real, and he should get a nice boost from Dak Prescott returning to the lineup. If not for Prescott’s injury, we might all be viewing Lamb as more of a top-10 prospect right now. After their five weeks together last year, Lamb was on pace to finish the season with 87 catches for 1,386 yards.

I am going to do a "best ball" league for the first time What are your top suggestions? This league will be no moves, no head to head, just total points. It will be an 8-team league that starts 2QB 3RB 5WR 2TE 2 KICK 2D. Standard scoring

For the four positions where you’re starting two players (QB, TE, K, Def) I’d likely be picking three players each. Two starters, and then there needs to be a third good option to cover for the many weeks that one of those two is either hurt or doesn’t have a good game. At each of these positions, you would get a little more production, of course, if you select a fourth, but it’s coming at the considerable cost of using a roster spot. So I would select a fourth at those positions only if there was something I really liked about that fourth player. At running back position, I would keep backups in mind. That is, if you select Christian McCaffrey, you definitely want to get Chubba Hubbard; if you pick Saquon Barkley, you should also pick Devontae Booker. By picking the backups behind your key running backs, it gives you a better chance of fielding a complete lineup for all 18 weeks. If McCaffrey were to miss half the season, for example, you might still get a full season of Carolina’s starting tailback had you picked up Hubbard in the later rounds. At both the running back and wide receiver positions, I would tend to focus on proven commodities with secure roles. In this type of format, I’m more interested in trying to secure 17-game starters, rather than swinging for the fences on hit-or-miss “sleeper” type guys. Make sound investments and let the bulk of the other teams fall away with ill-advised gambles.

The writeups on the defenses begin on page 87. They assume the scoring system of 6 points for touchdowns (including both defense and special teams), 2 points for each takeaway and 1 point for each sack. Those rankings are summarized on page 26 (the “Standard” version of the Cheat Sheet.

There are also other Cheat Sheets, and the rankings are different on each of them. For the PPR page, there’s also a scoring component, with a score of 0-12 each week for how many points the defense allows (if it allows 24 points, it would receive nothing; 22 points would earn 1 point, 19 points allowed would equal 2.5 points, and so on). And for the TD-only Cheat Sheet, they’re ranked solely on their ability to score touchdowns. Here, the thought is that you’ll choose the Cheat Sheet where the scoring system matches your league.

Andy doesn’t actually “rank the defenses”. Instead, he goes in each week and decides on a forecast in various stat categories – points allowed, sacks, fumble recoveries, interceptions, defensive touchdowns, kick-return touchdowns, and rushing and passing yards allowed. The ordering of the defenses is then determined by the scoring system. If you don’t see one that matches your league, you can plug in your own format using the “custom rankings” tool at the website.