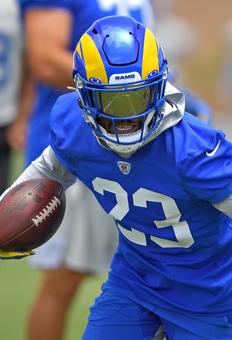 Admittedly, I haven't seen many mock drafts yet, but it feels like the first round could be even more of a crapshoot this year. How high do you draft McCaffrey and Barkley after they missed most of last season? What about CEH, who failed to live up to the rookie-year hype? Is Zeke Elliott still a top pick after an underwhelming season? Does Cam Akers sneak into the first round?

I think Christian McCaffrey will be the first pick in most drafts. He’s healthy, and with his catch-run ability, he’s awfully tough to beat. He’s the guy I would select No. 1 overall. We did an experts poll in the magazine, and 19 of the 20 analysts ranked him as the No. 1 overall pick. Barkley’s a little bit more of a question mark, but he finished 5th in that poll. I think he’ll be going in the middle of the first round. Akers I see as a key guy – perhaps the most important player on my draft board. He finished only 11th in that experts poll, with only six of the 20 experts putting him in their top 10 among running backs. But I’ve got as the No. 3 running back on my board.

I am in a TD-dependent dynasty league and have Marquise Brown, who scored 8 TDs last year. The Ravens added more receivers and intend to throw more. Is Brown worth keeping or would you go for a sleeper like Gabriel Davis or Darnell Mooney?

I would stick with Brown. I’m pretty confident he’ll be Baltimore’s leading wide receiver. There’s been some attempt to create a narrative that the Ravens ranked last in passing last year because of shortcomings with their wide receivers. I don’t buy into that at all. I think Brown is just fine. I think he’s a DeSean Jackson-type talent who just needs to be used more effectively. I think he’s better than both of the notable receivers they added in the offseason (Sammy Watkins and Rashod Bateman). They just need to do a better job of getting him the ball.

Brown has that game-changing ability. He was 5 yards behind everyone for what should have been a long touchdown in the playoff loss at Buffalo, but the throw was off target (that was backup Tyler Huntley at QB). Brown caught a couple of long touchdowns in his first game as a pro, but since that time (and this is hardly believable) Lamar Jackson has connected with him for only one touchdown of 25-plus yards, and it came on an off-schedule play in the Monday night shootout in Cleveland. Brown caught a 70-yard touchdown at Pittsburgh late last year, but that came from Trace McSorley. I expect the Ravens will try some new things with their passing game this year; maybe they can nudge things in the right direction. We’ll see. Brown was pretty good in the second half of last year, particularly in your type of TD-heavy league. In his final eight games he caught 37 passes for 534 yards and 6 TDs.

I’m approaching a dynasty draft and I have an embarrassment of riches. I’m going to have to give up a guy like Ronald Jones, Damien Harris, Zach Ertz, and Lynn Bowden because I have 12 keepers better. I’m thinking of using those guys to move up from the last pick in round one, or target a guy who will outplay their value. Can you give me some names of players that you have much higher than others that could be dynasty assets?

Ronald Jones and Damien Harris might interest some teams (as it stands now, I wouldn’t think Ertz or Bowden would be selected in a 12-team draft). But I’m not sure that either of those two running backs would move you up much in the first round. I wouldn’t think that either Jones or Harris would be enticing enough to move you up into the top 6 overall. It might make more sense to keep those guys around, hoping there’s some development that enhances their value (maybe Leonard Fournette or Sony Michel suffers some kind of injury). If you had to draft today, I wouldn’t think you’d be able to land one of the coveted rookies. More likely, you’ll be picking a prospect that you hope you can hit on. In a rough sense, it looks like there are eight high-level rookies right now – three backs, three wide receivers, Kyle Pitts and Trevor Lawrence. But unlikely you get a shot at any of those guys.

Long-time Bills fan here that truly enjoyed watching them sling it around last year. Most projections for Buffalo's offense last year were off by quite a bit. No one really saw that coming. What offenses do you see that could fit that mold this year?

I’ve got my projections in front of me, and I’ve got the numbers from last year. If we blend those two, there are four teams that improve by at least a half touchdown per week – Giants, Rams, Cowboys, Jets. I’ve got the Texans, Titans, Packers and Saints as the offenses that will decline the most. On this one, I went with per-game numbers to avoid issues with the schedule switching from 16 to 17 games.

An opponent's total strength – OPTS -- (offense plus defense) could be introduced as a control variable to examine the relationship between an offense's time on the field and the turnovers generated by its defensive team. Perhaps number of wins could be used to operationalize OPTS and it could be dichotomized into Strong and Weak. If the original relationship is being suppressed by this control variable, one would expect the number of turnovers to increase within the Strong category because the defense spends more time on the field -- and to decrease within the Weak category because the defense spends less time on the field. Just a thought.

I read your letter through a few times. I’m not sure exactly what you’re getting at. (What, for example, does “OPTS” stand for?). But I’ll toss out these numbers for you to chew on. In the last five years, there have been 44 games where a team has gotten at least 5 takeaways. In the majority of those games, the team with all the takeaways finished with fewer yards (I suppose because the turnovers kept their offense on the bench). Only nine of the turnover-rich teams finished with at least 50 more yards (they’re tagged with black dots). But 15 of those turnover-plagued teams (also tagged with dots) finished with at least 50 more yards. A 24-20 majority of the turnover-rich teams were playing on the road. And 42 of the 44 teams won the games (with one tie, and one team losing despite all the turnovers – in bold). The Steelers were involved in both of those outlier games. In the chart below, you’re seeing the total yards by both the team and the opponent. The final column shows the takeaway totals for the 44 teams.